On August 21st 2017, all of North America will experience a solar eclipse. Although Calgary isn’t in the ‘path of totality’, where the moon will pass directly in front of the sun, Calgarian's can still witness a significant partial eclipse with the moon covering about 80% of the sun at the maximum point at around 11:30 am. The ‘path of totality’ that runs from Oregon to South Carolina where a total eclipse can be witnessed is only about 100km wide, but most of the lower 48 US states and southern Canada will still see over 75% coverage of the sun as the moon passes in front of it. 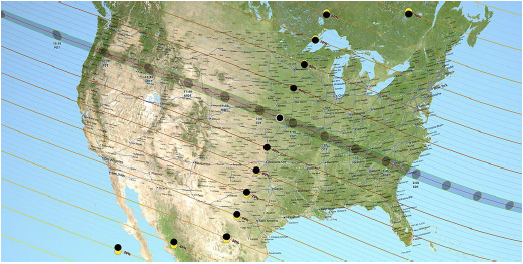 Staring directly at the sun at any time is obviously a bad idea – Use only certified viewing glasses to view the eclipse safely.

How often do partial and total eclipses occur?

Full eclipses are quite rare and often occur several hundred years apart in a specific location. For example, the Toronto area hasn’t seen a total eclipse since 1142 and won’t witness the next one until 2144, over 1000 years apart. Therefore, those with the opportunity to travel to the lower 48 US states to the ‘path of totality’ will get the chance to witness a rare and spectacular sight. 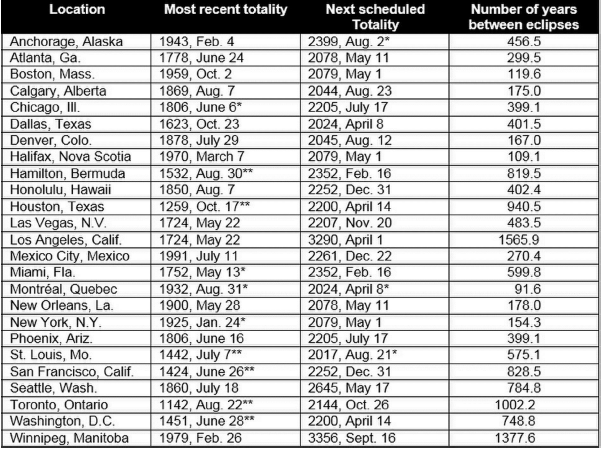 The images and links below show the path of the eclipse across North America and how the eclipse will look at the maximum in Calgary. 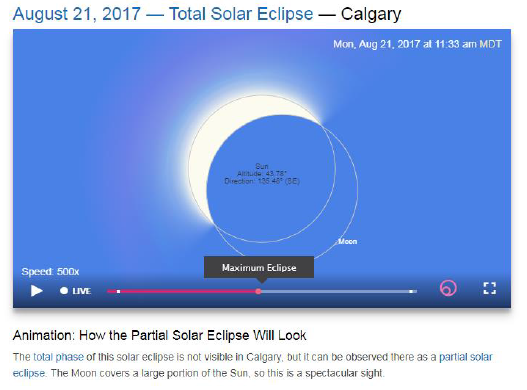 NASA and the Exploratorium in San Francisco have provided smartphone apps that show a simulation of the eclipse from any point in North America. You can input your hometown to see what the eclipse will look like as the moon passes in front of the sun and provides times for the best viewing.

Unless you are in the path of totality and only during the two minute window when the moon is totally blocking the sun, looking directly at the eclipse is unsafe. Viewing glasses that are ISO certified to international safety standards for viewing the sun are highly recommended for watching the eclipse. Even dark sunglasses are not sufficient protection. Filters are also available for telescopes and camera lenses for viewing and capturing the eclipse safely.

A list of reputable vendors provided by the American Astronomical Society is available. Be wary of cheap knock-offs that are available online that don’t have proper certification.

The NASA website is also a good resource for information on the science of eclipses as well as viewing safety and history.

The Chinese Imperial Emperor Chung K’ang (B.C.E. 2159 – 2146) learned of an eclipse when he heard much noise in the streets as his subjects tried to drive away the dragon that was eating the sun. They were successful, but the Emperor’s two court astronomers, Hsi and Ho, were reportedly beheaded for failing to predict the event.

Babylonian Clay Tablets such as the one below, provide physical records of ancient eclipses viewed by humans, in this instance between 518 and 465 BCE.

Ancient Greeks recorded eclipses as early at 647 BCE. The poet Archilochus spoke of the total solar eclipse of 6 April 647 B.C.E. in mythic terms:

"There is nothing beyond hope, nothing that can be sworn impossible, nothing wonderful, since Zeus, father of the Olympians, made night from mid-day, hiding the light of the shining Sun, and sore fear came upon men."

In 1919, Sir Arthur Eddington verified Einstein’s theory of General Relativity, by observing the bending of starlight passing near the sun during an eclipse.