A trip to the Silicon Valley Maker Faire… and what on earth is a ‘Maker Faire’?

A trip to the Silicon Valley Maker Faire… and what on earth is a ‘Maker Faire'?

A few weeks ago I had the good fortune to visit the San Francisco Bay area on the weekend of the annual ‘Bay Area Maker Faire’ (I don’t know why they choose to spell Fair with an ‘e’… but that’s how it is presented on their website).  For those unfamiliar with the term and type of event that this is, it can be described as a large collection of do-it-yourself type nerds all gathering in one place to show off.  Nerds showing off?  Please read on…

The Maker Faire in San Mateo is one of the biggest fairs of its type. Due to the proximity to Silicon Valley and the dozens of technology companies that operate there is

why it likely has the highest concentration of passionate nerds with the highest disposable income of anywhere on the planet. 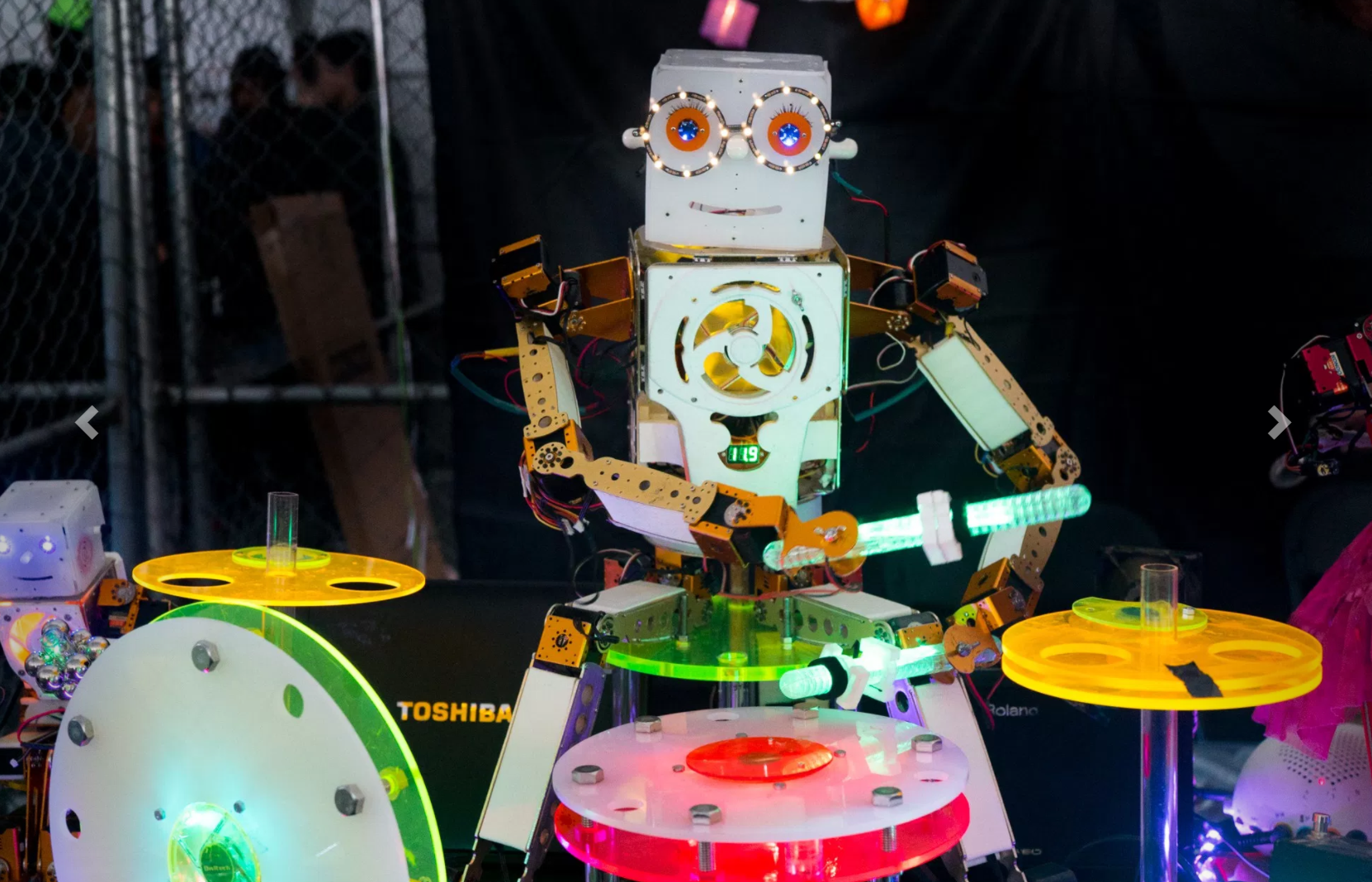 The event was sponsored by companies like Intel, Google and Microsoft with the goal of promoting their latest products, apps and technology.  That being said, the event is open to any individual or small company with a project or product that they want to share with the world.  The faire attracts everything from home gardeners, people passionate about preserving and pickling their backyard harvest, arts and crafts types to new technology start-ups showcasing their virtual reality, drones and 3D printing (and/or whatever other technologies they are working on to bring to market).

The Maker Faire was divided into different areas including a darkroom, food, robotics, electronics, drones etc… as well as a number of stages for speakers, magicians, demonstrations and the like.  There were talks on everything from how to ‘synthesize carbon Nano-tubes from atmospheric C02’ to ‘how to make a gourmet sweet potato pie’.  My kids were less keen on the talk about the carbon Nano-tubes and more excited to go see the ‘physics magician’.  I can’t say that I blame them for not wanting to listen to a talk about creating microscopic molecules out of an inert gas that you can’t see.

It was a fascinating experience to witness the variety of projects, technology and ideas being showcased.  While the start-ups that were showcasing their products were likely too early stage for most investors, it was worthwhile to see what technology trends are coming and try to get a sense of what will be the next big thing.

Drones, robotics, 3D printing and virtual reality had the largest representation of start-up companies featuring their products. With the wide variety of competing technologies being showcased it felt like I was witnessing the creative destruction process firsthand.  Judging by the number of different companies working on these technologies, it is likely that some form of drones or 3D printing or virtual reality technology will find a mainstream application soon.  While most of these small start-ups are just a few keen engineers or enthusiasts tinkering in a lab (with low odds of their small company becoming the next Google or Apple) there will inevitably be a few winners who will make it big.  It was hard not to get caught up in the enthusiasm of the participants and their projects.

Numerous companies promoting drone technology were present and making efforts to promote small scale hobby drones.  While these make for a fancy toy and seem to entertain the kids for a few hours, it is hard to see the real disruptive use for small drones in the home in our day to day life.  Most home use drones today are capable of taking interesting aerial photographs and perhaps annoying your neighbour’s dog, but beyond this the practical day to day use is limited.

The real disruptive use will come when the technology evolves to the point where a drone is capable of delivering packages or transporting human passengers a useful distance.  As I wrote about in prior blogs, Amazon is busy testing drone delivery systems and the Chinese company Ehang has a prototype drone that can transport a passenger that is due for flight testing this summer. (http://www.ehang.com/ehang184/)  Flying over traffic to your home or work without a thought to rush hour delays or accidents on the freeway would be a welcome technological development for most commuters.  Unfortunately, this technology wasn’t presented at this year’s Maker Faire, but there many other small companies working hard to scale up the technology and make it reliable enough for commercial transportation purposes.  Although not every small company will succeed in their venture, the combined knowledge that is gained from their efforts will surely advance and refine the technology for all players.

The Virtual Reality companies were also popular with several companies showcasing their wares.  My children were among the crowd clamoring for a chance to try out one of the VR goggles and VR systems for five minutes at a time.  It was fortunate that we arrived early in the day and didn’t have to wait in line for too long to test it out.  While it was a novel experience, it was another technology that seems more fad than practical in our day to day life.  I have a TV with 3D glasses that are never used, so I can’t imagine donning a heavy set of goggles to interact in a virtual world on a regular basis.  Time will tell on this technology as to whether there will be mainstream applications for it beyond gaming and entertainment. 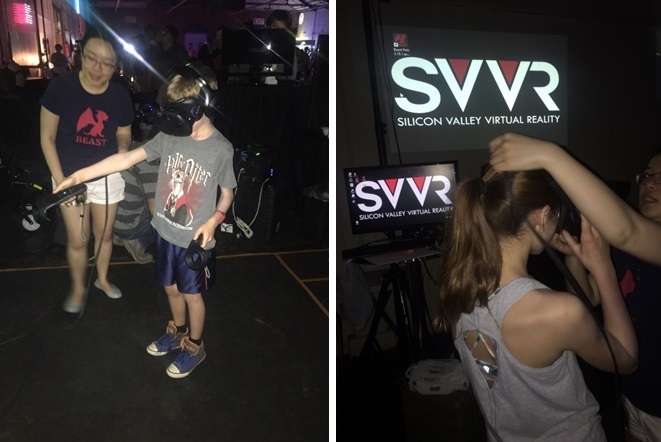 I stopped by several booths of companies showcasing their 3D printing technology and I was tempted to purchase a 3D printer.  One company had a 3D printer that would work off any smartphone and was about the size of grapefruit.  At $99 the price seemed like a good deal, but all that the device could do is print small plastic trinkets.  While it is enticing I don’t know what plastic trinkets are missing from my life that I don’t already have that I would need to custom print my own.  My kids already have more Lego bricks and other plastic toys than they know what to do with.   Industrial applications, like using advanced materials to make custom parts, seems like a logical next step for this technology.  However, I doubt that most people will see the need to make their own plastic toys.  Even at the relatively low price of $99 (plus the cost of the raw material) I can buy a lot of plastic trinkets, so I decided to pass on that one.  Based on the large number of companies featuring 3D printers, all at around a $100 price point, it seemed like a very crowded space.  Let me know when the ‘Star Trek’ replicator capable of printing any type of delicious food on demand exists…

One booth that I did spend some time at was a company called ‘Feetz’ that makes a custom 3D printed shoe.  They have developed a software algorithm that allows the customer to create a three-dimensional rendering of each foot from pictures taken from three different angles.  The customer can then build a custom pair of shoes on the Feetz website in a number of styles or colour options and have the shoes manufactured by their 3D printing factory to the exact size and shape of their feet.  I had my feet scanned by the CEO of the start-up company and discovered that I have one foot that is a half size larger than the other.  Now knowing that my feet are different sizes, I felt compelled to order my own custom shoes online when I got home. 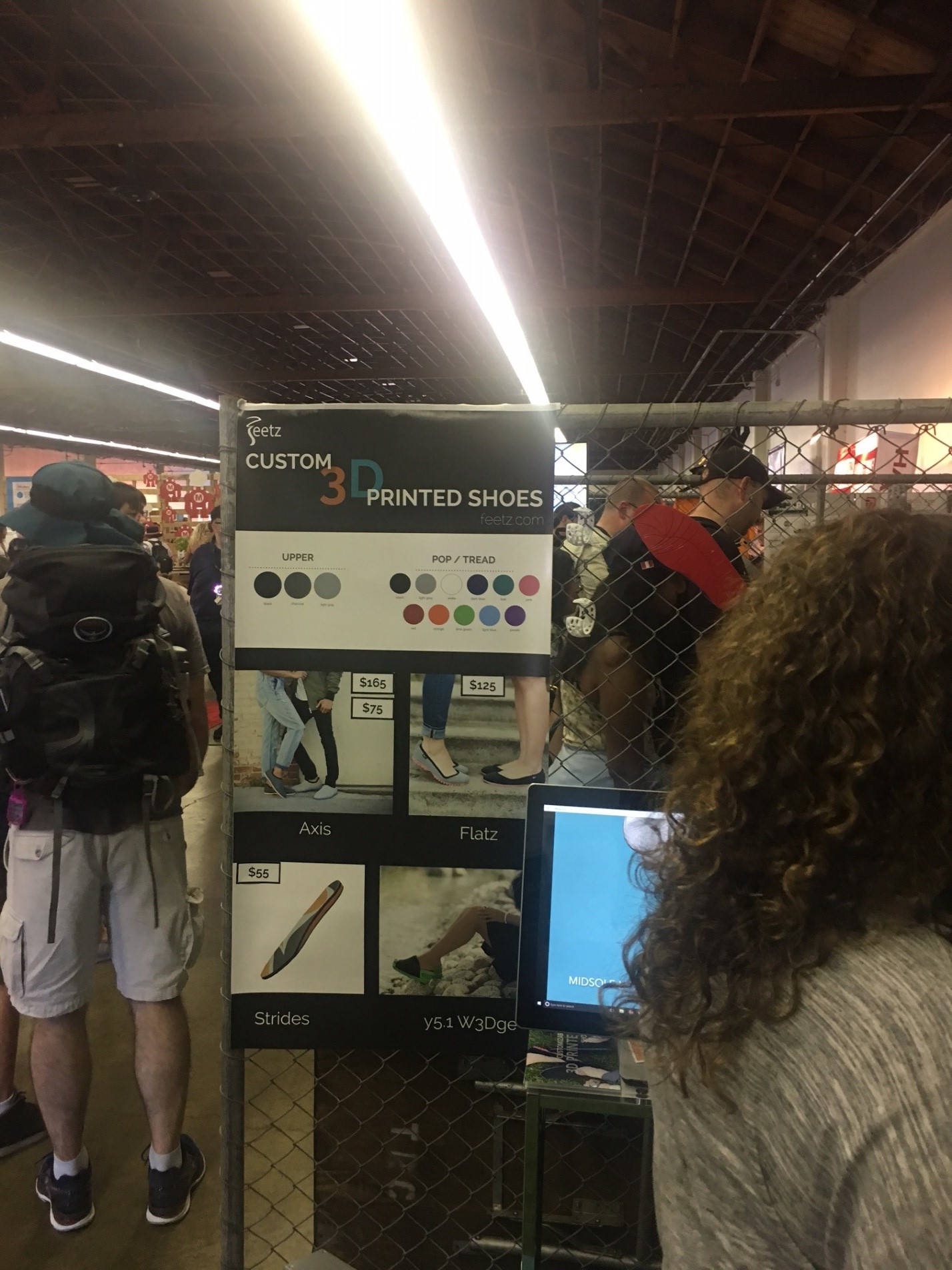 My visit to 'Feetz' booth for a pair of custom 3D printed shoes.

This company seemed to have potential as they are taking a new technology and using it to produce a useful product that provides a unique improvement over the current market offerings.  The benefit of 3D printing is commonly touted by the trite phrase: ‘complexity is free’.  Meaning that any added complexity of manufacturing a part doesn’t cost any more, as it takes a 3D printer the same amount of time and material to create an intricate piece as it does to create a simple shape.  If the customization aspect is perfected to the point where as every customer can have custom sizes, select exactly the colours and styles that they want (as this company seems to have done) then making every piece custom for every customer is possible with little added cost.  My order will take a few weeks to produce and ship, but perhaps in a future blog I’ll write about how they fit and perform once I have a chance to try them out. 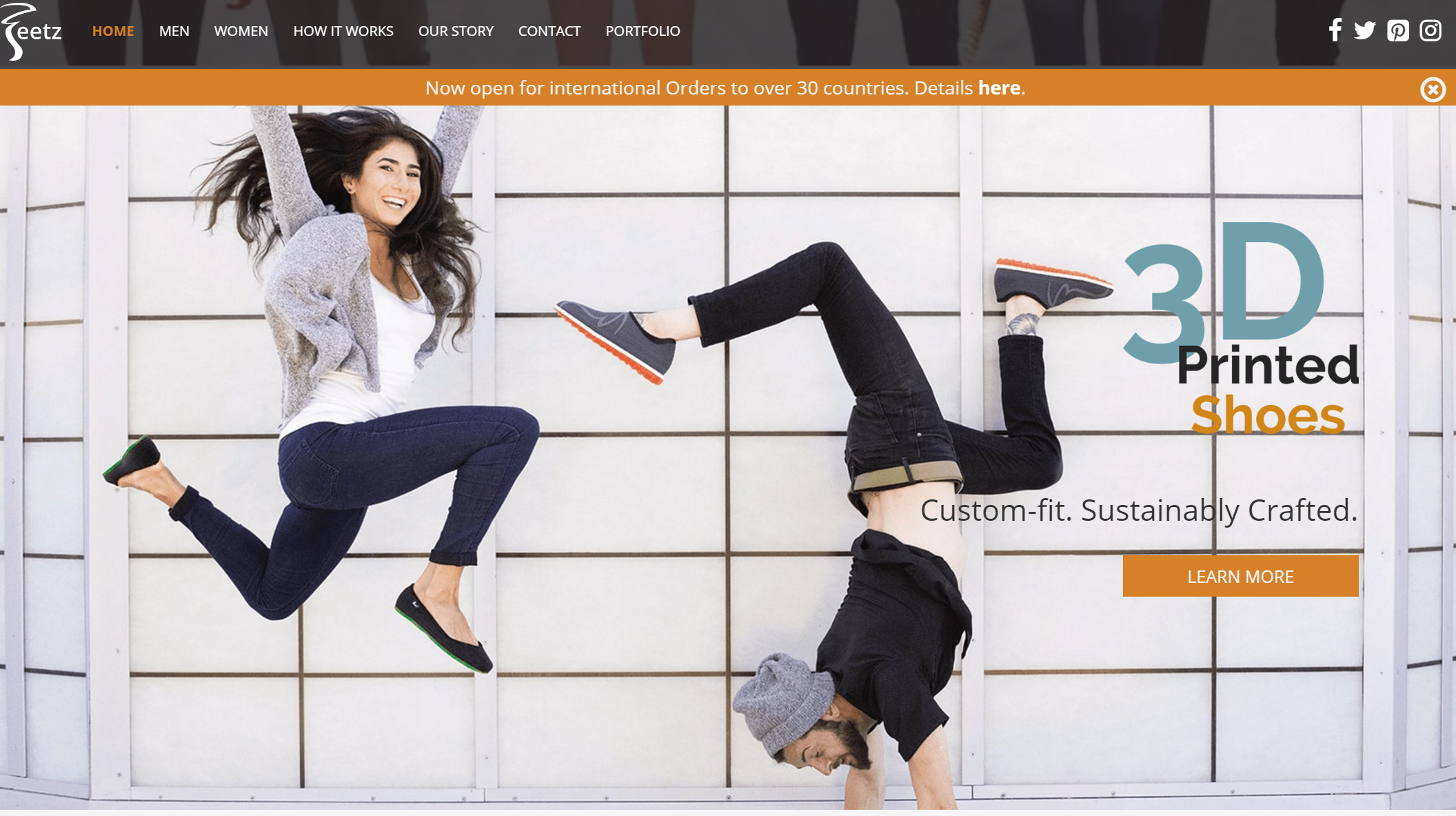 As with most products, there will always be the do-it-yourselfers who prefer to tinker, customize and build everything themselves.  That is the whole point of the Maker Faire and the reason that it attracts crowds of like-minded tinkerers.  However, most mainstream consumers are looking for products that are useful, fun, make their lives easier and are more productive right out of the box.  While much of the technology that was showcased at this year’s Maker Faire will remain in niche markets, it was fascinating to witness the glimmer of some new technologies blossoming that have the potential to go mainstream.

I have included a photo gallery of a few of the other interesting sights and experiences at the Maker Faire: 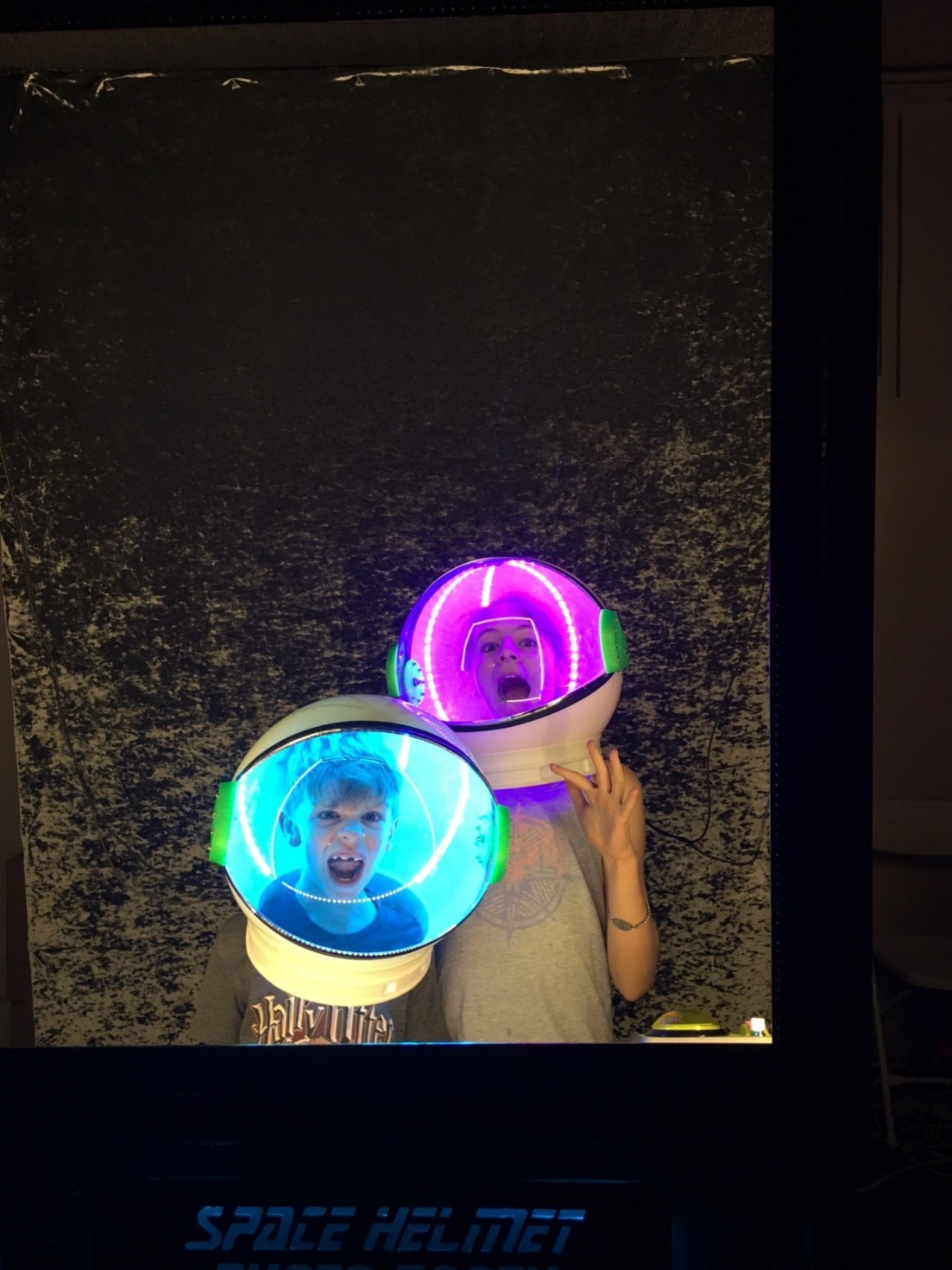 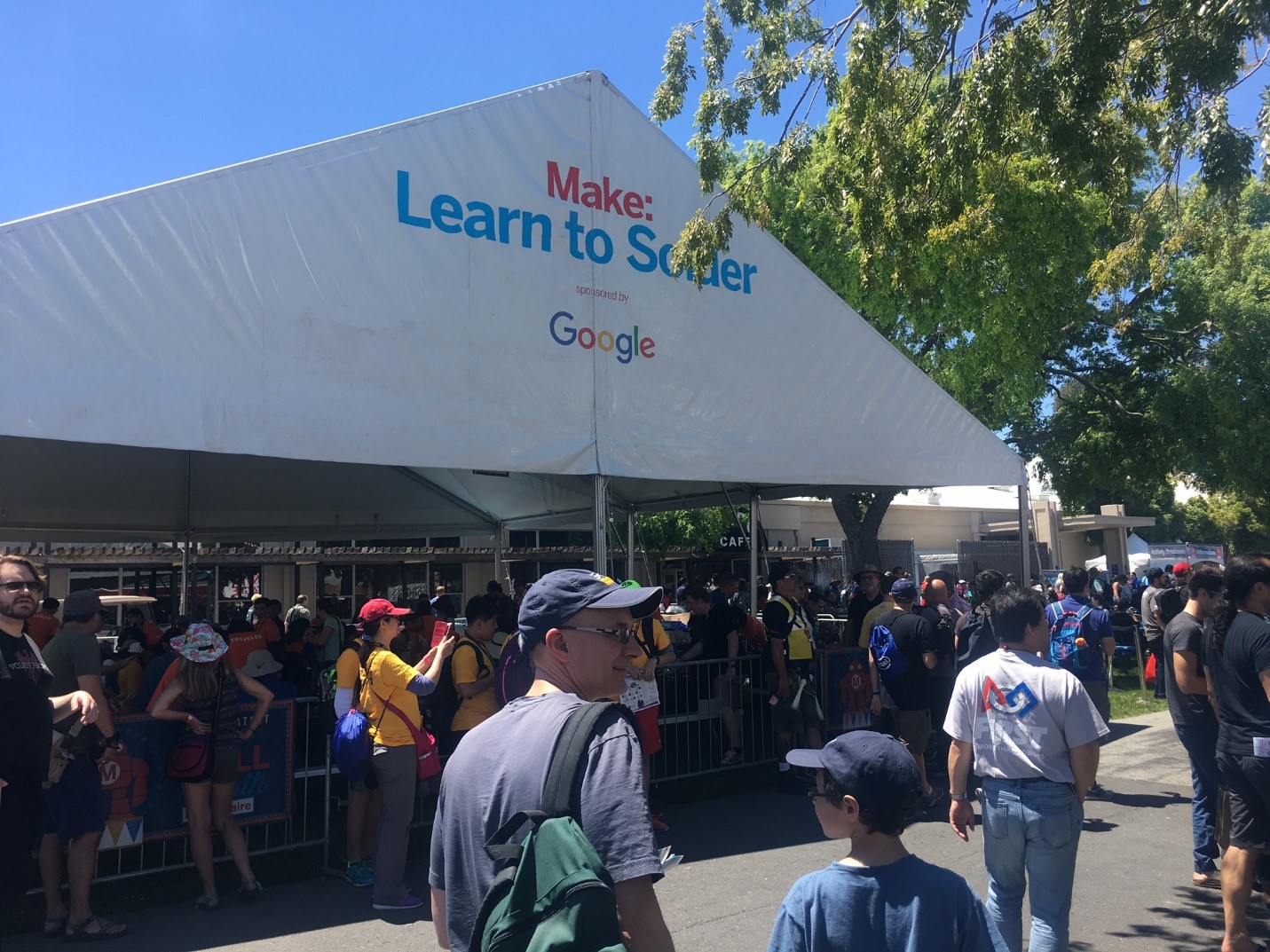 'Learn to solder' - Courtesy of Google 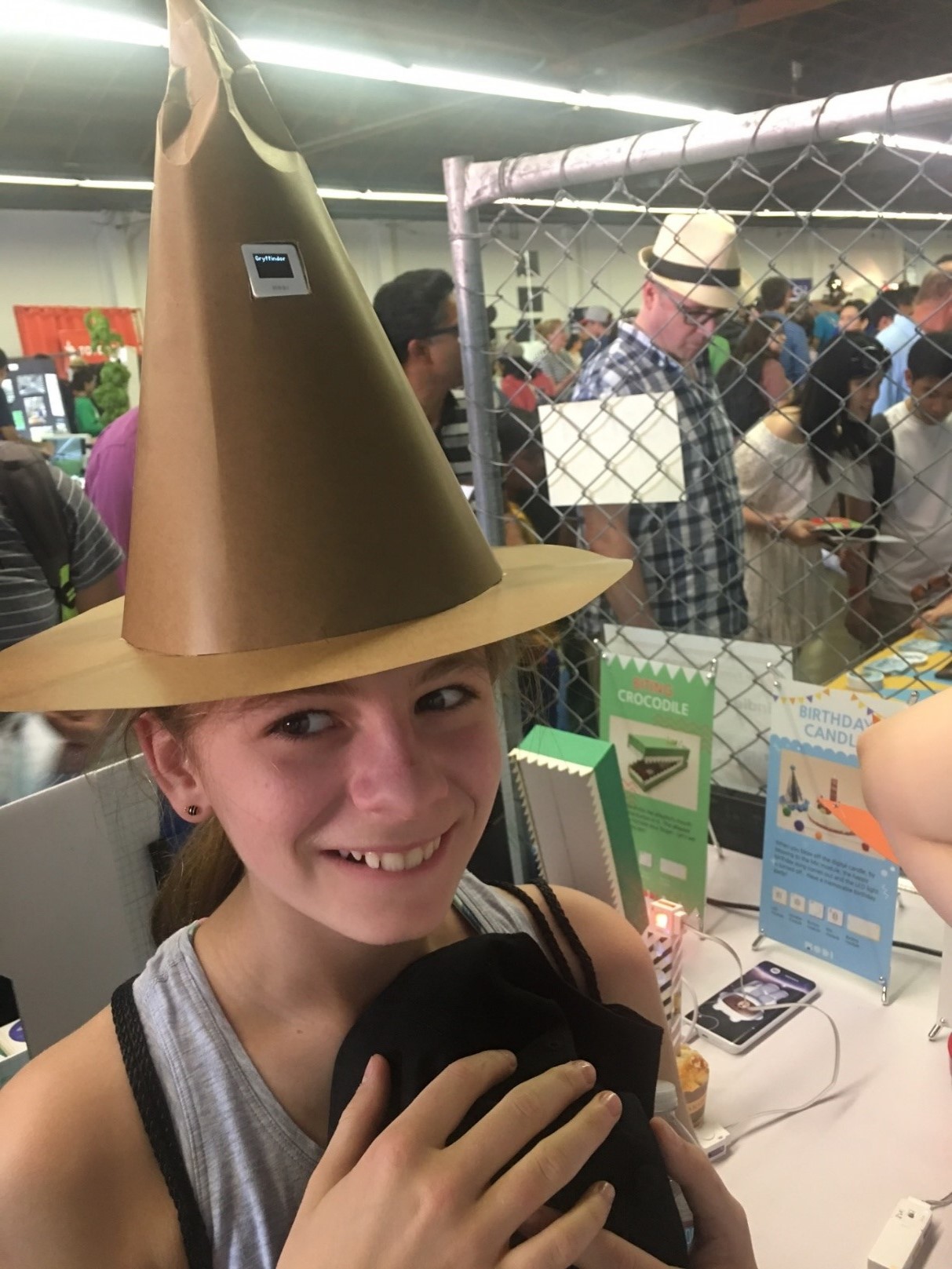 According to home made electronic sorting hat - 'Gryffindor' 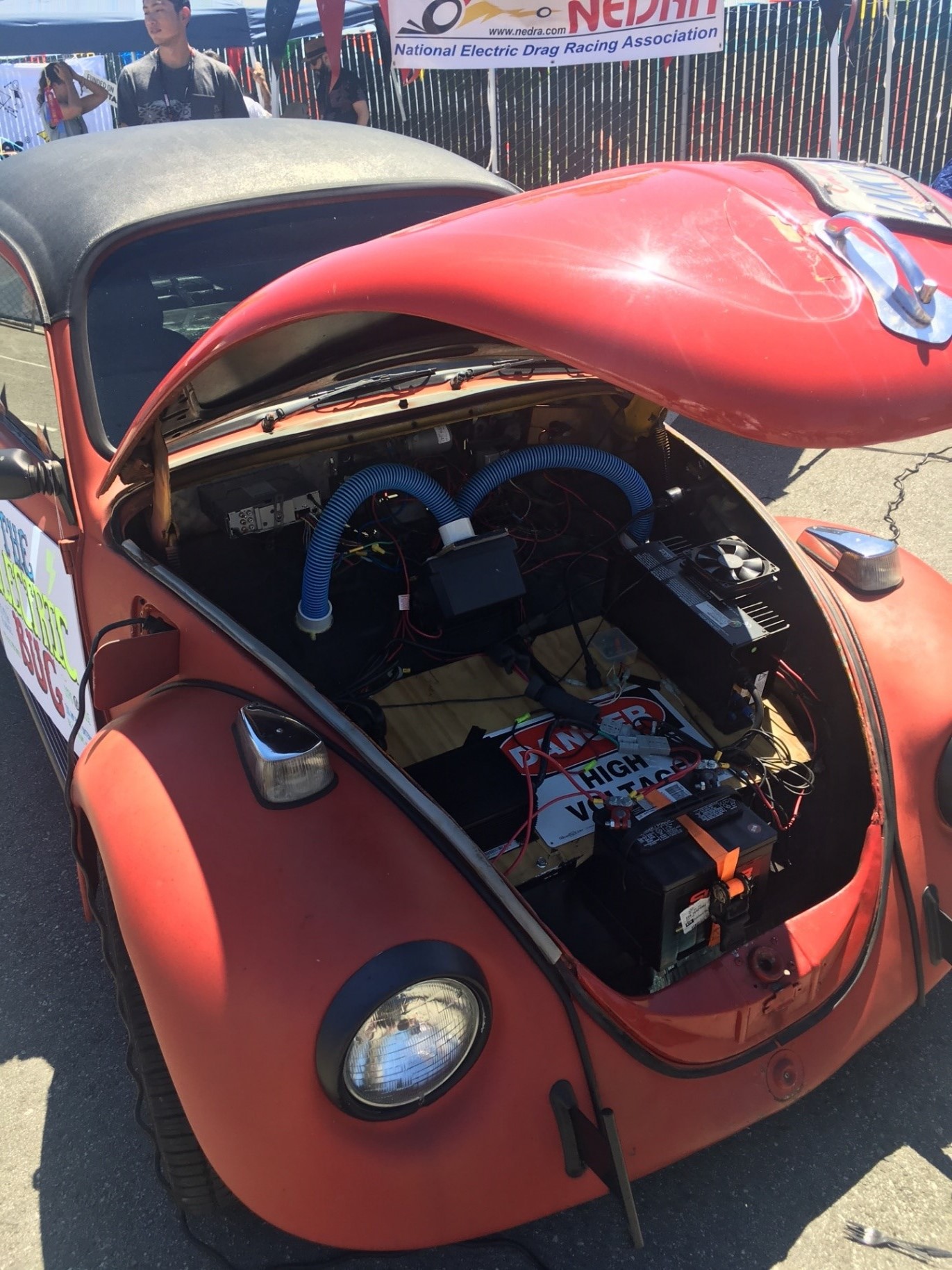 A VW Beetle gains a new calling in life as an electric drag racer. 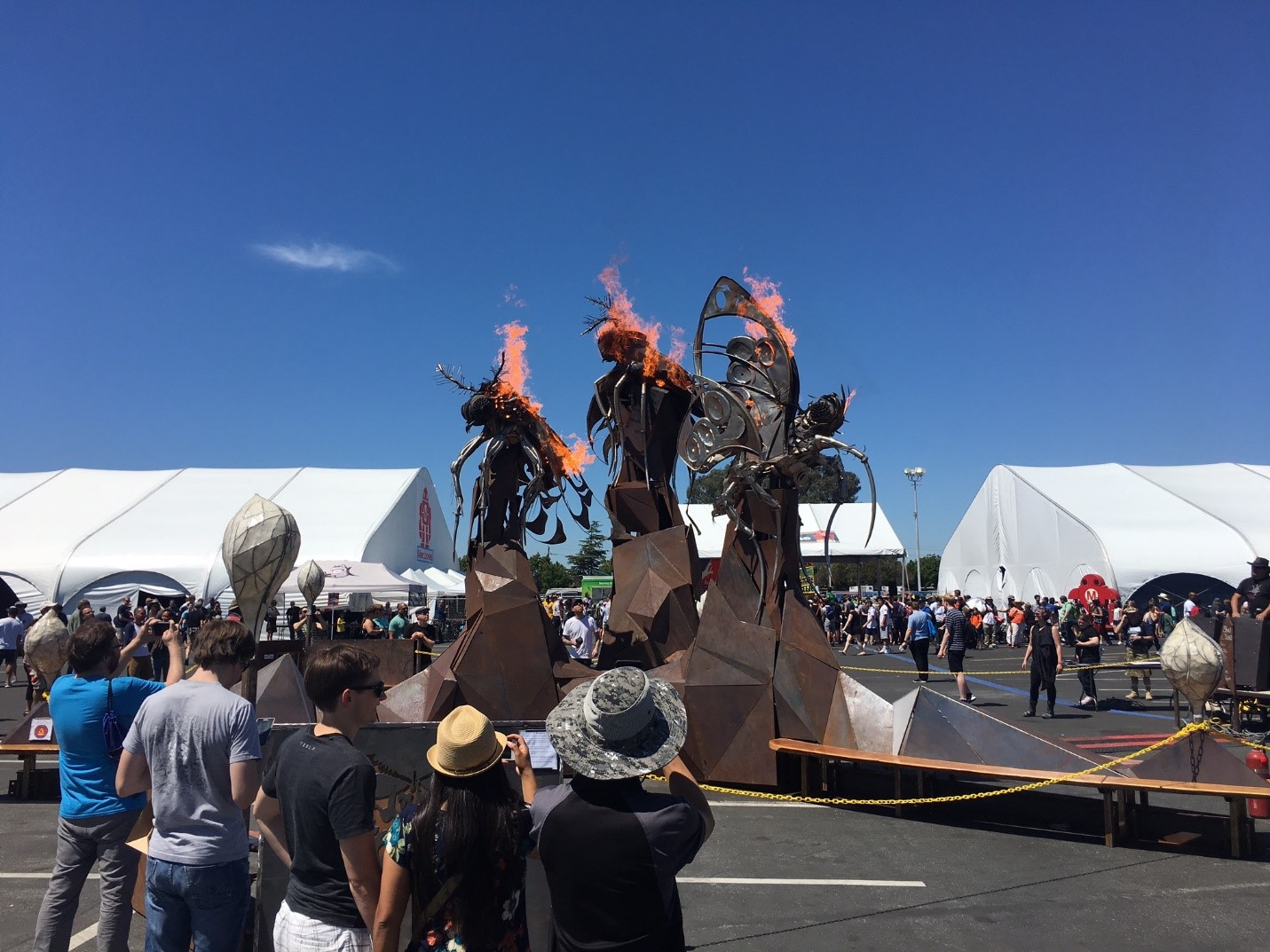 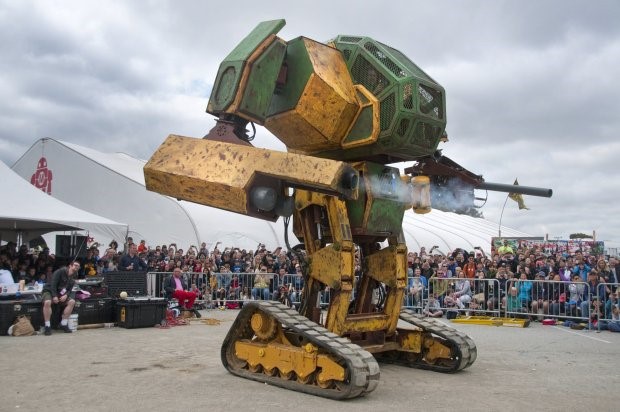 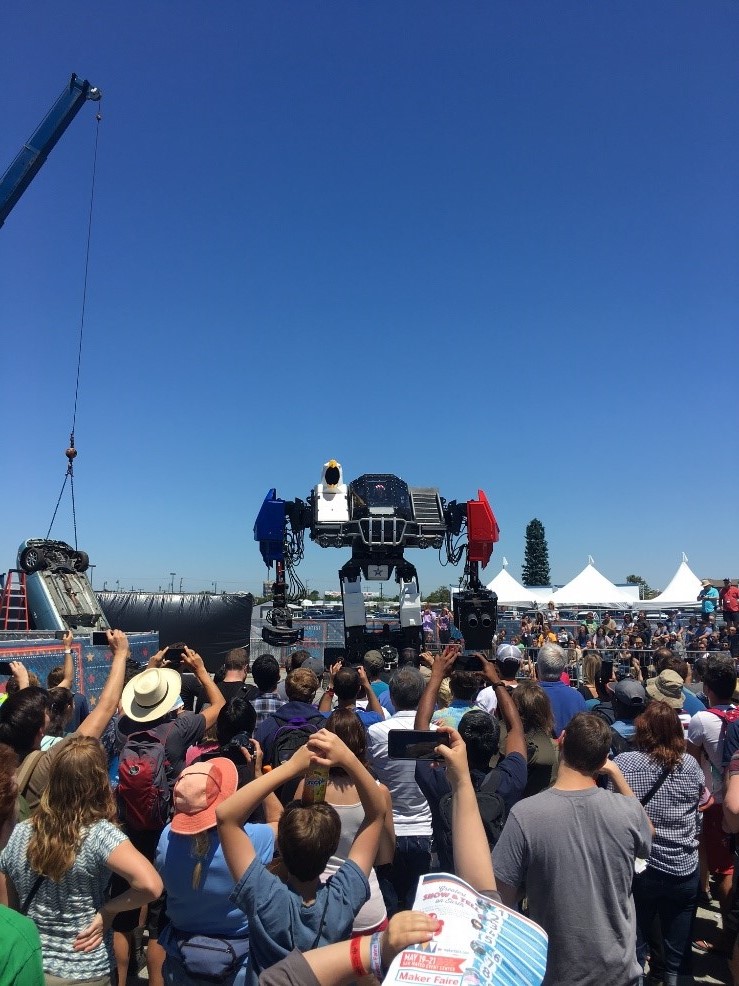 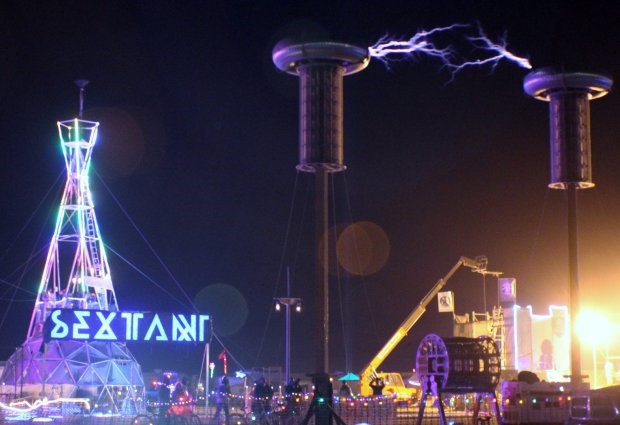 Images by Jeffrey Mackie and www.makerfaire.com