Would you step in front of a self-driving car… knowing that it was programmed to avoid hitting you? 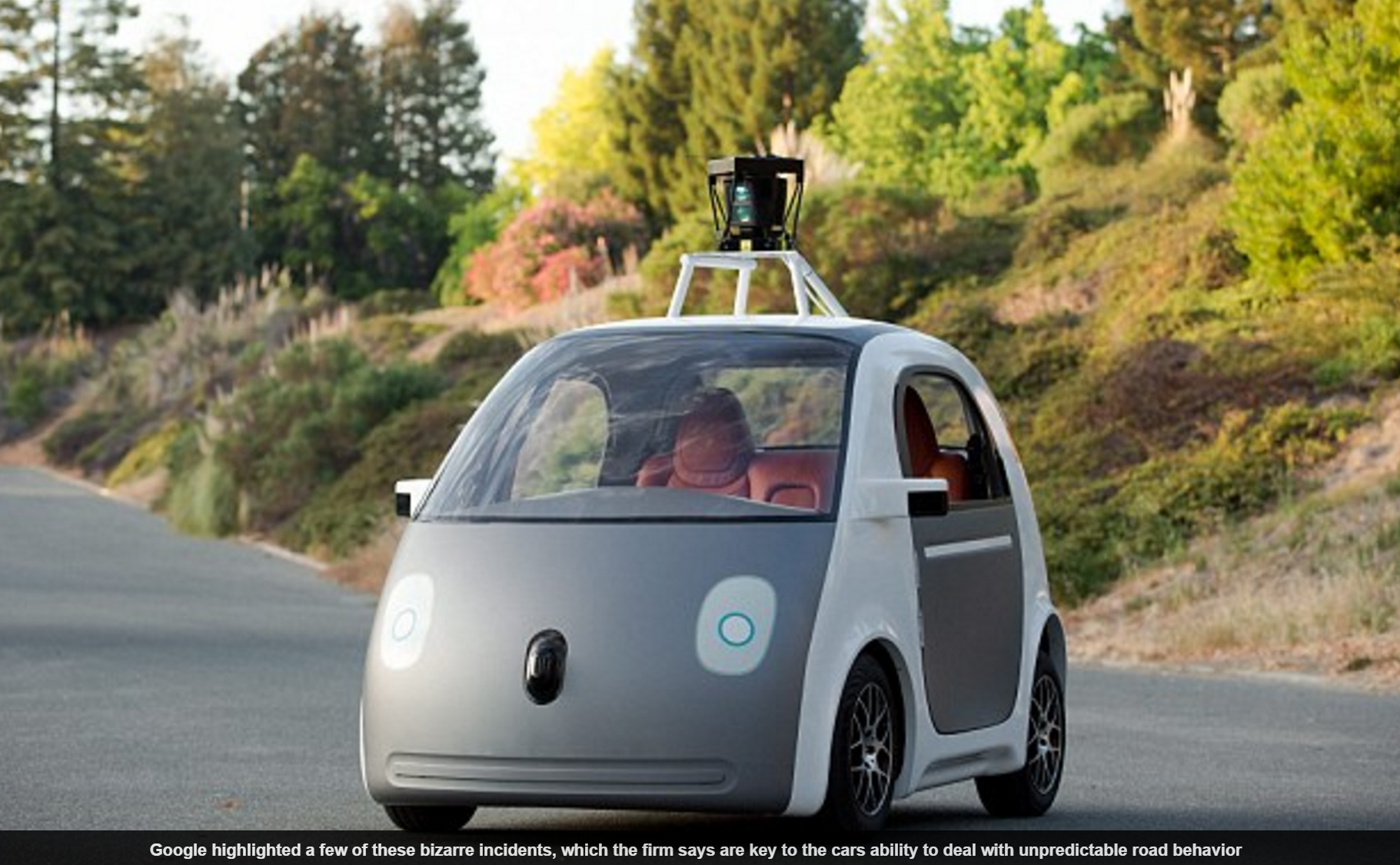 The introduction of self-driving or autonomous cars has many broad implications to employment, insurance, where people live and how they get around major cities.  The vision that is portrayed by Waymo, Tesla, Uber and other companies at the forefront of this development is that personal car ownership will decline and be replaced by a system where everyone simply summons a driverless autonomous car that is available on-demand that will show up promptly and take them where they need to go.  Users would simply pay a membership fee or pay per trip and it should be much less expensive than vehicle ownership when all of the costs are factored in like insurance, parking, maintenance, depreciation, etc.  In theory, this is a much more efficient system as most people’s cars sit either parked at their home or at their workplace 95% of the time.  If or when this becomes reality, the need for a personal vehicle for urban dwellers will diminish and most of the cars on the road will be driven by computers. 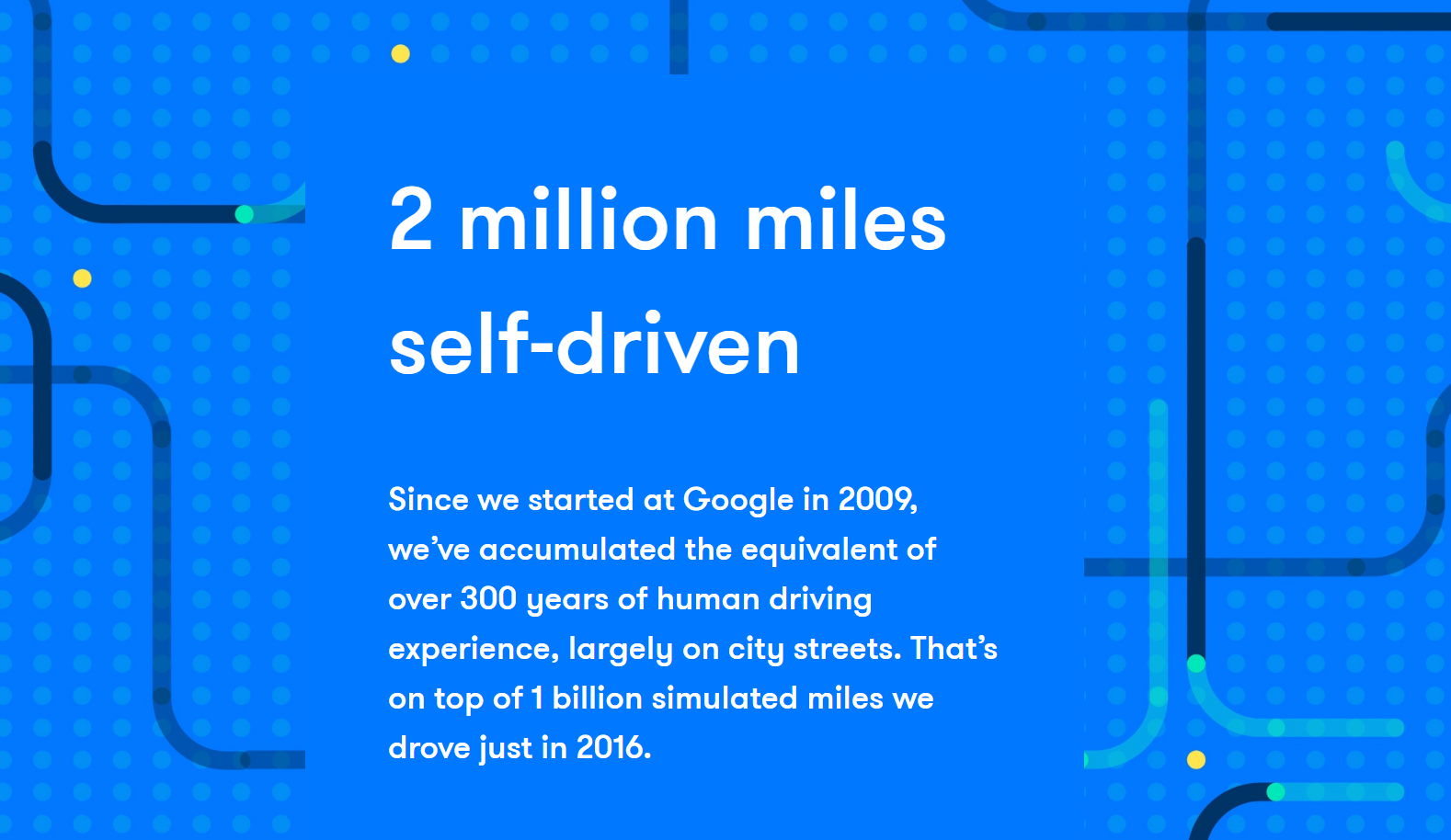 One of the main arguments in favour of self-driving cars is that they will need to be much safer than human driven vehicles in order to be accepted.  Comparing the statistics for air travel to passenger vehicle travel as a proxy, 1.2 million people die in traffic accidents each year compared to one or two commercial airline crashes in a given year.  Hypothetically, if the same number of people were to die in airline crashes each year compared to vehicle crashes it would be the equivalent of a 737 falling out of the sky every hour.  When a commercial airplane does crash, no matter where in world the crash happens, it is front page news.  However, most traffic accidents and even fatalities are barely mentioned, even in local news.  The statistics show that when airplanes do crash, in 94% of cases the cause can be attributed to human error.  Therefore, applying a similar logic to cars and trucks, taking the control out of the hands of humans and putting a computer control system in charge should result in more than a 90% reduction in traffic fatalities. 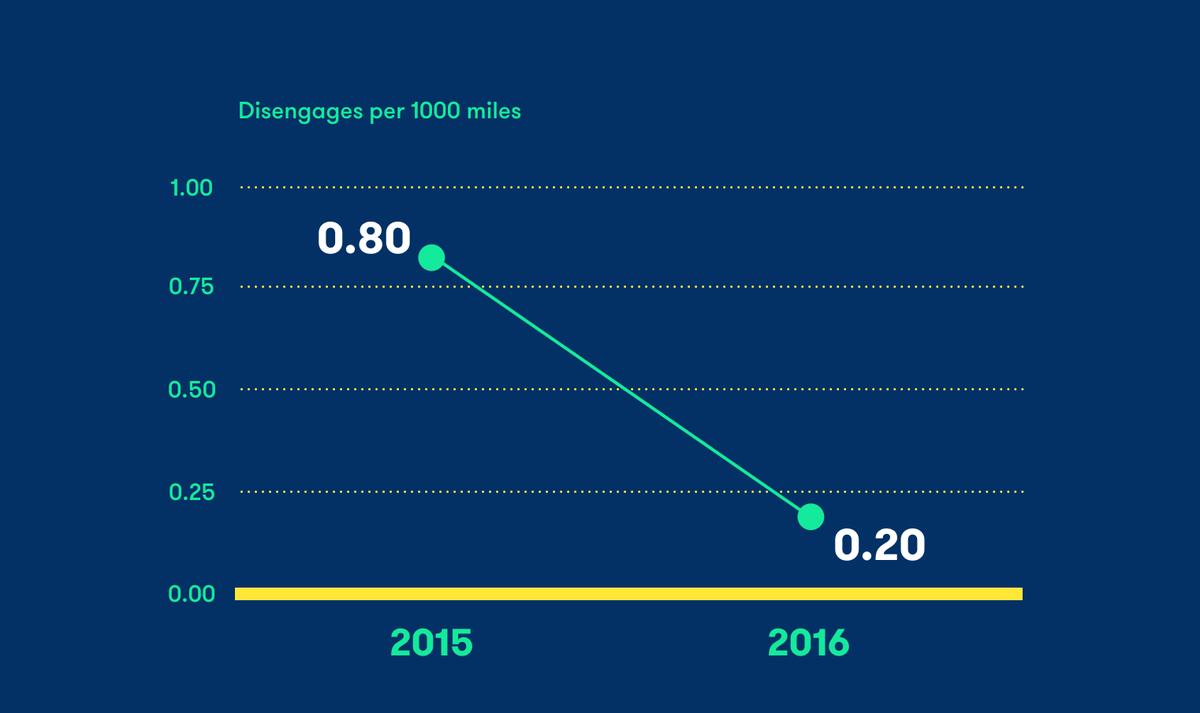 This logic assumes that the computers and control systems will eventually become advanced enough to reach the point where they are orders of magnitude safer.  As with any technology, the level of sophistication does steadily improve as hardware and software combine to work seamlessly together.  According to Waymo, (Google/Alphabet’s self-driving car subsidiary) their technology is improving at a rapid pace.  Their test program still involves a human driver behind the wheel of every test car with the capability to take over the controls or disengage the autonomous system.  The company’s data shows that the number of ‘disengages’ per 1000 miles driven has fallen from 0.8 to 0.2 in the past year or a four-fold improvement.

When self-driving cars are introduced, it is fair to assume that these cars will be programmed to avoid hitting pedestrians and cyclists, as there will be significant liability placed on the companies that build the cars.  But when the general public figures this out, will everyone simply cross the streets through traffic at will, knowing that they are safe and unlikely to get hit by an oncoming car?  People are conditioned to respond to their environments and behave much differently depending on the norms of the city or country they are in. 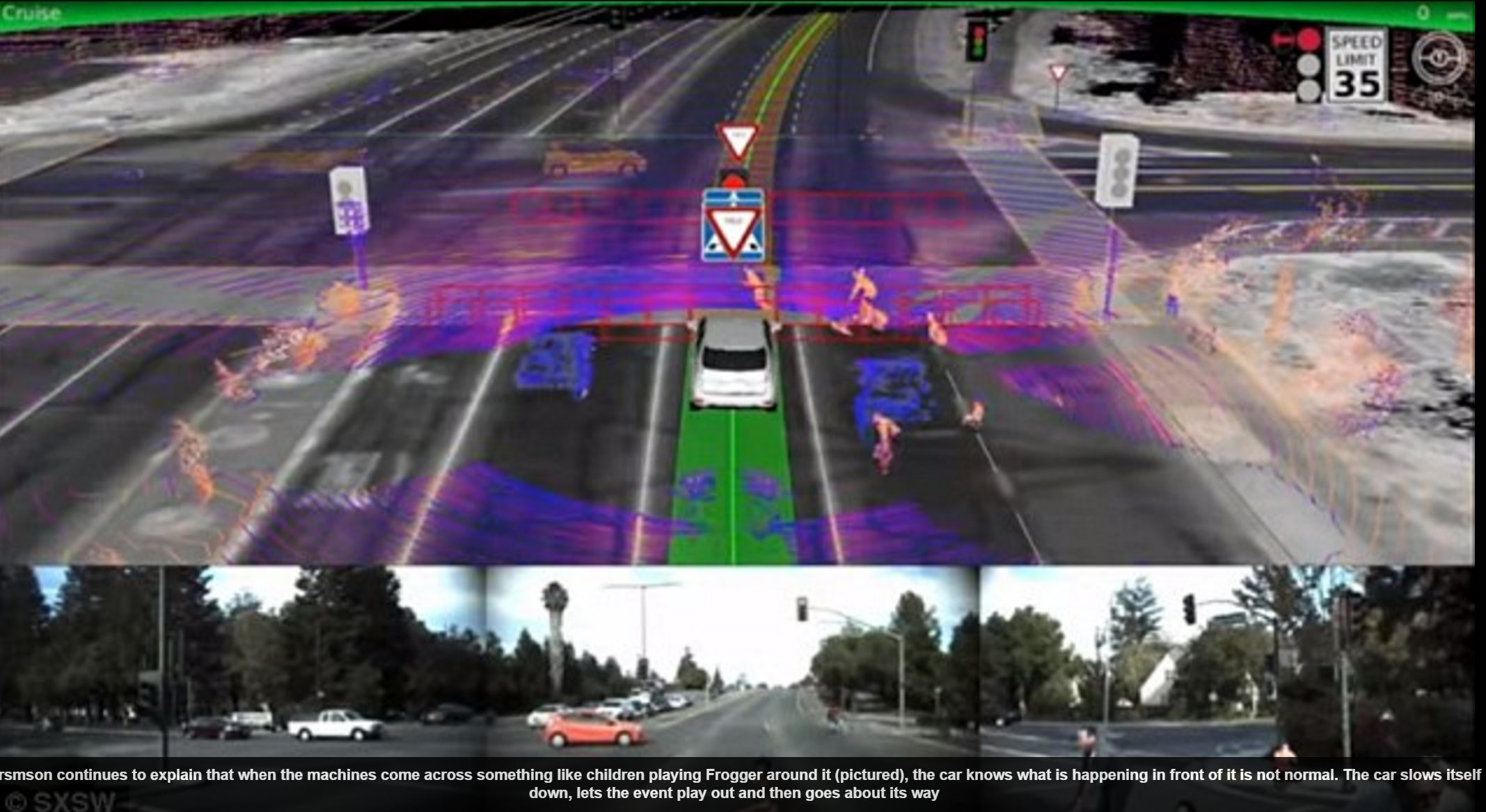 My hometown of Calgary has, from my experience, some of the most complacent pedestrians in the world.  It is one of the few large cities that I have ever visited where pedestrians barely look at the oncoming traffic when they step out onto the street at a cross walk.  People will regularly step out with their head down looking at their smartphone and barely notice that the driver in the oncoming pickup truck had to stand on their brakes to avoid running them over.  This behaviour is slowly changing as the city grows and traffic gets worse.  However, it still seems like bizarre behaviour to step in front of a massive vehicle moving at high speed where the driver may or may not have seen you, but pedestrians are conditioned to feel safe and confident that there is low-risk in behaving this way.

In most other large cities in the world, traffic does not stop for pedestrians.  Pedestrians all know this and behave accordingly, as it only seems sensible to stay out of harm's way and not step in front of an oncoming car.  Even at a cross walk with flashing lights, pedestrians will make eye contact with the driver to make sure that they are seen and the oncoming vehicle is stopping before stepping into traffic.  This arrangement seems to be the norm in most countries and the expectation that cars do not have to stop for pedestrians is arguably much safer and more efficient. Why not let simply let a speeding car pass by and then step out into the road as opposed to playing some bizarre game of ‘chicken’ where the upside is low and the downside is a trip to the hospital or worse?

On a recent trip to Mexico, it is hard not to notice a much different approach to traffic flows and how pedestrian's behave.  The first thing that you notice driving around rural Mexico is the low-tech but highly effective method for controlling vehicle speed at intersections.  You rarely see traffic lights and instead find enormous speed bumps that force vehicles to slow to a crawl as they pass over them.  Attempting to drive over one of these speed bumps at any higher speed would risk damaging the vehicle.  I certainly wouldn’t want to be in a self-driving car that failed to pick up on this type of obstacle.  It also sets the tone for how traffic and pedestrians behave.  As traffic is already barely moving at an intersection with these large speed bumps, actually coming to a full stop to let someone cross isn’t an issue and is generally accompanied by a friendly wave.  It is nearly impossible to get into an accident at an intersection where traffic in both directions is moving along at such a leisurely pace.  There is also a much more laid back approach to car seats and occupant safety in Mexico.  Bringing our northern protective devices (car seats with 5-point harnesses) down south seems wildly overprotective compared to the local’s approach where entire multi-generational families will pile into a pickup truck with 4 or 5 people across the front bench and another half dozen or more people in the bed with not a seatbelt in sight.  I suppose when traffic moves at a much more laid back pace and no one is rushing or cutting each other off in traffic the actual risk is quite low in these circumstances. 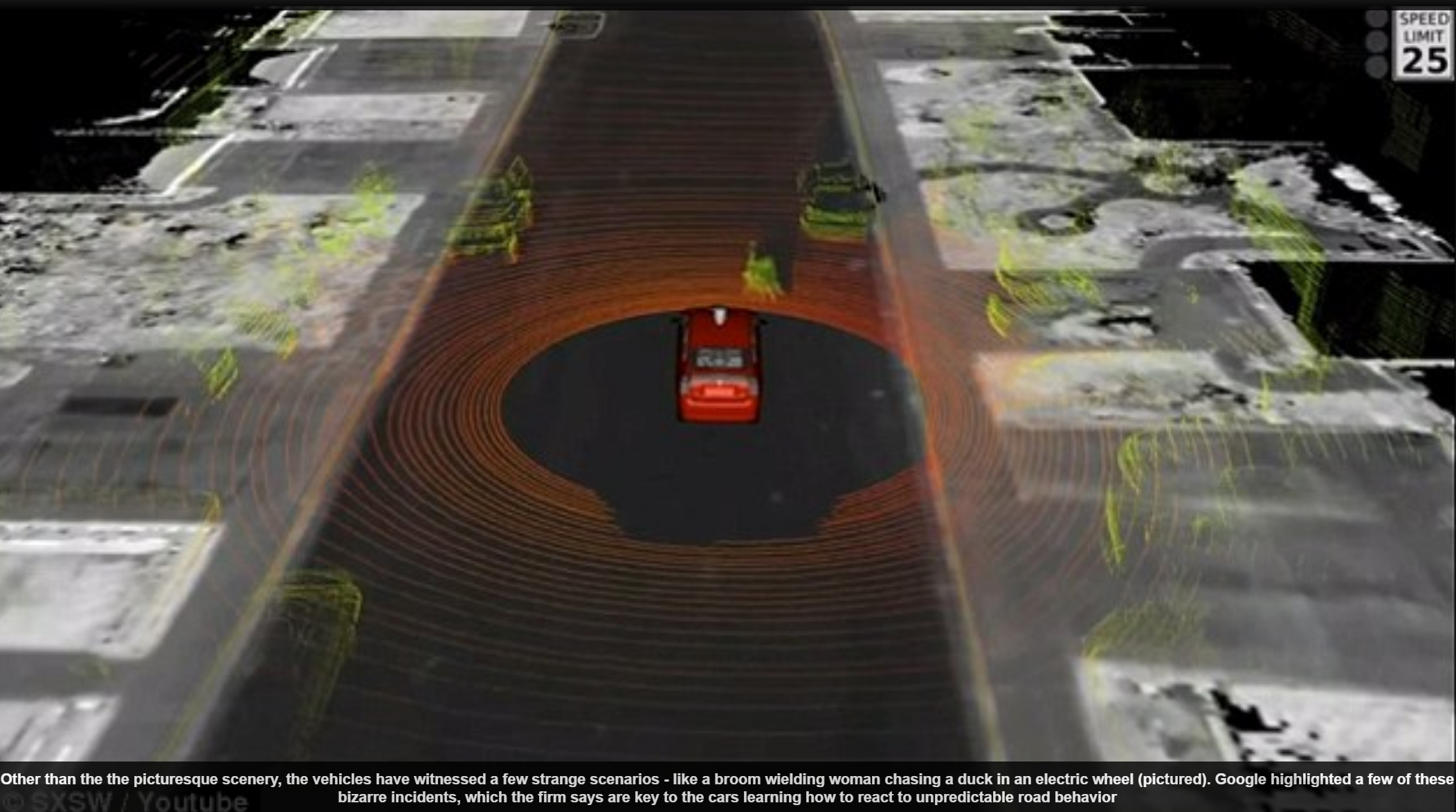 Companies testing autonomous driving technology have already witnessed people jumping in front of their self-driving cars to force them to stop.  This obviously seems like a foolish thing to do, but it doesn’t take long for people to test the limits and figure out that they have the control in this situation.  Google/Alphabet’s autonomous vehicle company Waymo has witnessed numerous bizarre situations that caused their test vehicle to stop and wait patiently while trying to figure out the situation.  In one instance a woman in a wheelchair was chasing a duck across the road and drove her wheelchair in circles on the street trying to catch the elusive bird.  The test car did what it was programmed to do, simply stop and wait.  Will this eventually create a situation where people, cyclists, skateboarders and even animals start to wander through traffic, knowing that they are perfectly safe and that traffic can only do one thing which is stop and avoid them?  Will human drivers cut off the autonomous cars in traffic, knowing that they can override the programming of the autonomous car (and not get a middle finger pointed at them… by the vehicle at least but perhaps not by the occupants)?

Will the introduction of self-driving cars create an environment that is actually less safe as people become conditioned to be more complacent in what is an inherently unsafe environment (ie: wandering out in front of heavy fast-moving vehicles)?

Are we creating a more complex and fragile world where people are less responsible for their own actions?  We will see how it all unfolds in the coming years.

Images sourced from waymo.com and dailymail.co.uk.