As I look back at the blogs that I wrote in 2016 and reflect on the trends that made headlines throughout the year, it is a thought-provoking exercise to predict which trends will continue and which will be the false starts or ‘head-fakes’ that are all too common in the world of technology.  It is impossible to list every technological innovation and breakthrough that was announced throughout the year, so I’ll focus on the handful of trends that are likely to continue into 2017 and examine their potential effects on society, established businesses and the investment markets in general.

When you are caught up in day to day life, the pace of change seems hardly noticeable, but looking across a year or a few years the rate of change is much more apparent.  Some of the big headlines were made in the areas of renewable energy, self-driving cars, artificial intelligence and the so-called sharing economy.  These themes seem to have long term growth and strong disruptive potential across many industries.

Tesla took over their related company SolarCity late in 2016 and claims to have created the first fully-integrated electricity generation, storage and transportation company.  Their claim is that a customer can now purchase a Tesla Solar roof, Powerwall battery storage pack and Tesla vehicle to create their own personal electrical ecosystem.  The Tesla solar roof is a potential game changer as it beautifully integrates the look and durability of a standard roofing tile with solar power cells.  In the past, a homeowner would have to install a giant rectangle of solar cells on their roof making the installation an obvious eyesore to anyone that looked up.  As you can see in the photo below it is nearly impossible to tell the difference between the new Tesla Solar roof and regular roofing tiles or shingles.  Tesla claims that these roofing panels will last twice as long as a traditional roofing shingles and have the obvious benefit of also generating electricity. 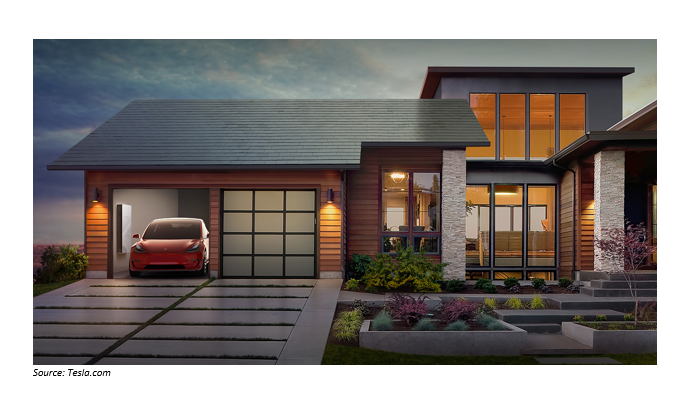 In 2016 solar power was the largest source of new installed electricity generation capacity in the US at 11.2 GW of new capacity, outpacing natural gas and wind power at 8 GW and 6.8 GW respectively.  With solar system costs falling, and more aesthetically pleasing residential installations now available, solar should continue to see strong growth in 2017. 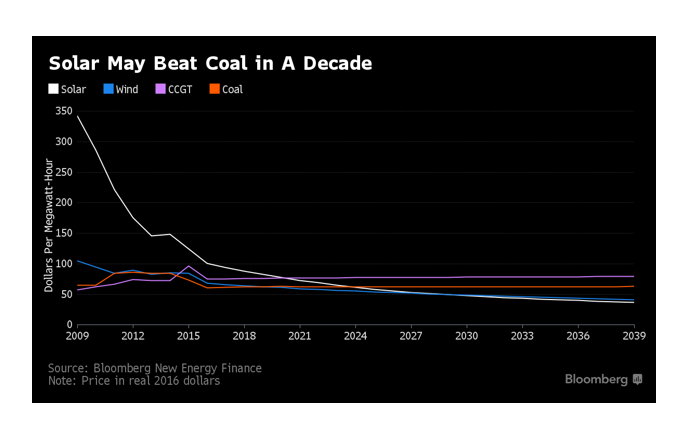 Headlines were made when Germany took initial steps to ban the internal combustion engine by the year 2030.  This seems like an incredibly heavy-handed regulatory approach from the country that invented the internal combustion engine.  Perhaps the VW emissions scandal caused the German government to propose such a strict new law and timeline, to force their automotive industry to clean up their act.  This move forces the German automakers to play catch up, as Tesla has already proved that electric vehicles are now mainstream, at least in the high-end market segment, with their model S sedan outselling all competitors from Germany in the ‘Large Luxury Sedan’ segment (Audi A7/A8, BMW 7 Series, Mercedes S class).  General Motors is also leading the way with their launch of the all-electric Chevrolet Bolt in the $30,000-$40,000 price range and a claimed driving range of 380km that was launched in late 2016.  Tesla is set to deliver their first cars in this lower $30,000 to $40,000 price range in late 2017, but it remains to be seen whether they will deliver a vehicle on time. 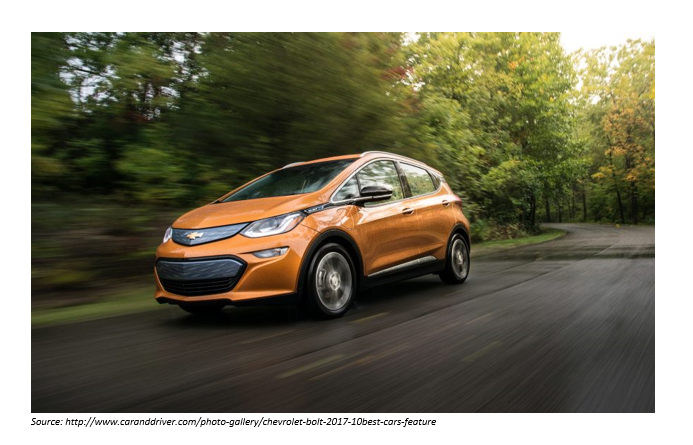 The topic of self-driving cars made numerous headlines, both positive and negative this year.  The first fatal crash involving a Tesla car in ‘autopilot’ mode was recorded.  A serious crash involving a self-driving car was all but inevitable, as cars with this capability gain popularity and log millions of miles on roads around the world. No automated system is perfect and crashes involving human drivers occur on a regular basis.  On the positive, side a driver experiencing a heart attack was driven to his local hospital in time for life-saving surgery by his Tesla in Autopilot mode, so I suppose that can be chalked up in the win column for self-driving cars.

Much of the debate on the development of self-driving cars is around how they should be programmed in the event of an unavoidable crash.  Should the car favour the driver and occupants or pedestrians on the street?  How would a car choose in the hypothetical situation where a mother and child step out onto the road vs a large group of elderly pedestrians?  If a collision was unavoidable and the car had to choose one group or the other group to run into, how does it decide?  How does it even know if there is a right answer in a scenario like this?  How would a human driver choose in this scenario?  Check out the website from MIT to test your own moral compass here. 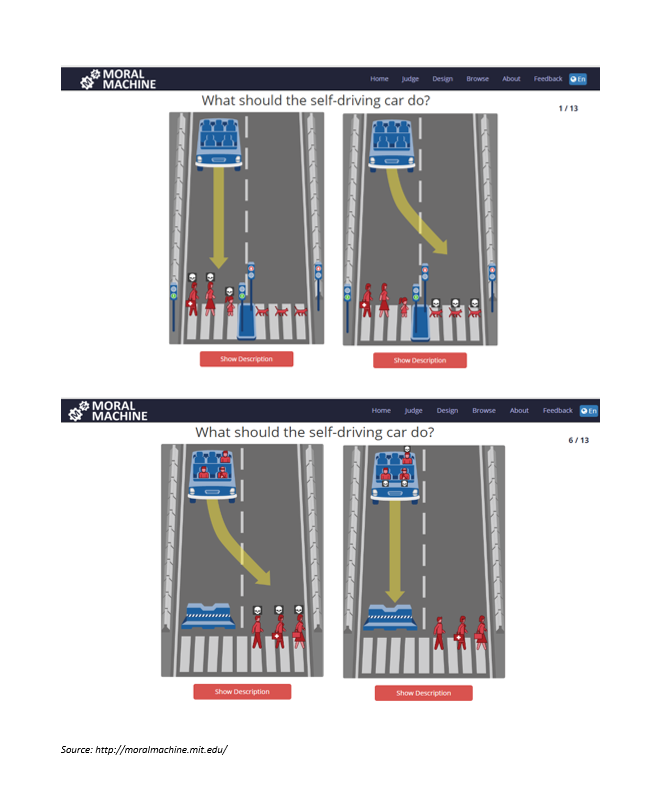 Artificial intelligence and virtual assistants made strides in 2016 with the introduction of Google’s home device and improvements to Apple’s Siri and Amazon’s Alexa/Echo offerings.  Each of these tech giants has their own approach to a virtual assistant that can answer many popular queries on demand.  Apple’s latest software update for iPhones always turns the ‘Siri’ feature on by default.  I can now simply say ‘Hey Siri’ and my iPhone will come to life and attempt to answer whatever query I need help with, without even touching it.  Amazon and Google both offer a pod that lives at home and doubles as a music player and at home helper that is always listening.  Having a device that is always on and always listening raises numerous privacy concerns.  Not that I have anything to hide, but it does make one wonder what data is being stored and what is being done with all the millions of snippets of voice commands that are being gathered from users.  In a recent murder case in the US, the prosecutors have requested that Amazon provide whatever voice/audio data that they have from the Echo device in the home where the murder took place, bringing a new technological twist to gathering evidence and solving crimes.  Google and Amazon note that their products have a ‘mute’ button to block voice recording whenever needed (at risk of stating the obvious, these devices also have power cords that can be unplugged if a user finds their presence particularly intrusive).

Last year Calgary saw Uber introduced, then promptly banned and then finally re-introduced in December 2016 under a new set of rules after a year-long hiatus.  Calgary’s mayor found himself in hot water after he was captured on video by the driver of the Lyft car that he was riding in making a lengthy rant against Uber. The video was posted online and the mayor was forced to apologize for his comments.  The irony that he was riding in a car run by Uber’s biggest competitor while ranting about Uber was not lost on the citizens of the Calgary and the city eventually relented and softened the strict requirements that were initially proposed for Uber to operate in the city.  Uber is fighting similar battles in cities around the world as the company works to grow their market share and global presence.  This theme is also playing out in other areas such as sharing and renting out rooms, apartments, vehicles, tools, and equipment. Sharing of people’s time and expertise for small skilled jobs is becoming ever more popular with the development of various apps and networks such as Fiverr and Upwork.

As we look out to 2017 there is the ever-present threat of ‘technological unemployment’.  Some estimates show that over 50% of jobs are threatened by technology and automation in the coming decade. Factories are becoming more and more automated.  Banking and financial services are increasingly reliant on automation, self-serve programs and robo-advisors.  Even certain medical professions are being threatened by robotic surgeries and sophisticated computer imaging systems that can read medical images with more accuracy than a human radiologist.  Service sectors like retail and restaurants are becoming increasingly automated.  McDonald’s is making more widespread use of kiosk ordering as well as employing various systems like automatic deep fryers and drink fillers throughout their restaurants to reduce the need for staff and improve efficiency. 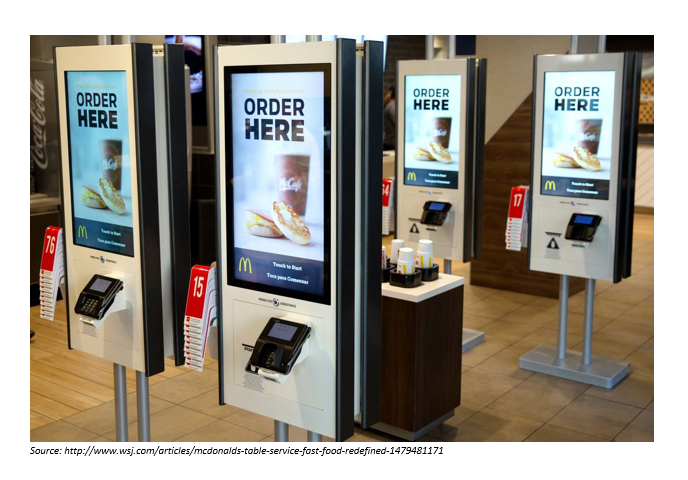 Amazon recently launched a storefront that has no checkout staff.  Customers simply check-in with their smartphone as they enter the store and fill their cart or basket.  The store is equipped with a variety of visual and sensor tracking systems to log purchases so that customers simply walk out when they are finished shopping.  It is remarkable that Amazon is making its step into retail, as the company started as a pioneer of web-only sales, training customers to buy everything from televisions to laundry detergent online and disrupting the entire retail industry in the process.  Amazon has now come full circle and is introducing its own retail storefronts to disrupt what is left of the retail industry. 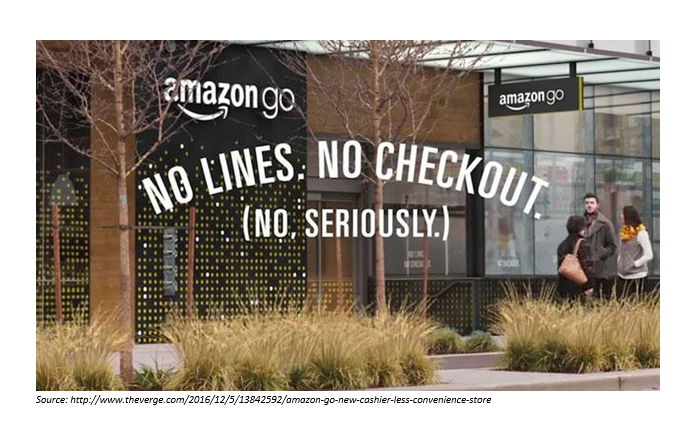 While 2017 is probably too soon for the widespread use of automated transportation, it will most likely be commonplace in the next five years.  The transportation sector is a major source of employment in North America and globally.  Adding up long haul truck drivers, local delivery drivers and taxi fleets as well as the related employment from these sectors, they contribute over 16% of jobs in the US.  Automated truck fleets and self-driving cars are likely to threaten the employment in this sector in the years to come.

Thanks for following my blogs through 2016.  Feel free to share this blog with anyone that you think might be interested.  I am looking forward to following these disruptive themes and any new trends that arise with you throughout the coming year.  Happy reading and all the best for 2017!