Pipelines, carbon taxes and other things that people get worked up about

In Canada we see protests over the construction of new pipelines on nearly a weekly basis.  Whether it is Keystone XL, Northern Gateway or even the reversal or expansion of existing pipelines, it seems that all major pipeline projects are met with strong opposition.  I am all for people exercising their right to free speech and peaceful protest, but I have to wonder if they are barking up the wrong tree.

Are pipelines really the issue?

Part of my goal of these blogs is to examine and understand the trends that are shaping our world.  Regardless of your views on climate change or environmental pollution, we should all agree that making a mess of our planet is probably not in line with the best interest of future generations.  I also like to dig into first principles underlying an issue when things don’t seem to make sense.  Without getting too technical, I always aim to explain the fundamentals behind new technological trends and issues.

Targeting pipelines as the main environmental villain seems somewhat like targeting the postal service for delivering the mail.  Pipelines are part of the system, but only a middleman in the grand scheme of things.  Whether they deserve it or not, pipeline companies and the energy industry in general have a terrible reputation with the public.  Pipeline companies could always do more to invest in leak detection technology and improve their track records for safety to help improve their image with the public, but in general they are still orders of magnitude safer and far more efficient than transporting oil by rail or truck.

I attended an investment conference in London last week and nearly every European portfolio manager mentioned that they take a hard look at a company’s ESG (Environmental, Social and Governance) performance before making an investment decision.  One portfolio manager basically stated that companies with poor performance in these areas have a hard time even getting a meeting with institutional investors and are effectively shut out of the capital markets.  The view is that companies that are weak in these areas are simply borrowing from the future and taking on large liabilities that don’t show up on a balance sheet, but will have a real financial cost in the future.

Other than the relatively small amount of energy that pipelines consume to run their pumping stations (about 1% of the overall emissions in the lifecycle of producing and consuming oil) they don’t directly produce much in the way of emissions.  While the leaks that happen can be catastrophic, they are fortunately rare in the context of the amount of oil that is shipped around the continent.  I find it puzzling that nearly all the environmental protests these days are focused around pipelines as the biggest environmental problem of the day.  As the map below illustrates, pipelines are a fact of life and operate out of sight 24 hours per day in nearly every corner of the continent. 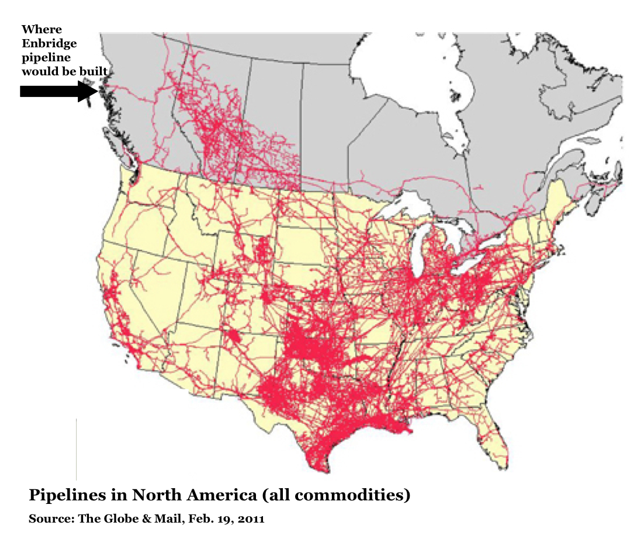 Part of the environmentalist argument is that if new pipeline development is stopped, then it will slow the development of oil from the oil sands and other sources of so called ‘dirty’ oil.  This argument is worth investigating as 80%-90% of the emissions from oil’s use are caused when the fuel is eventually burned in the engine of a vehicle, airplane or ship.  While producing oil from the oil sands is certainly more energy intensive than simply pumping conventional crude oil out of the ground, approximately 80% of the emissions still come when the fuel is burned in a vehicle’s engine and emitted from the tailpipe.  Doing an apples to apples comparison, approximately 90% of the emissions come from the tailpipes of vehicles after refining conventional light oil (these numbers are approximate and vary depending on the specific source of the oil and quality, but they are close enough for this simple example). 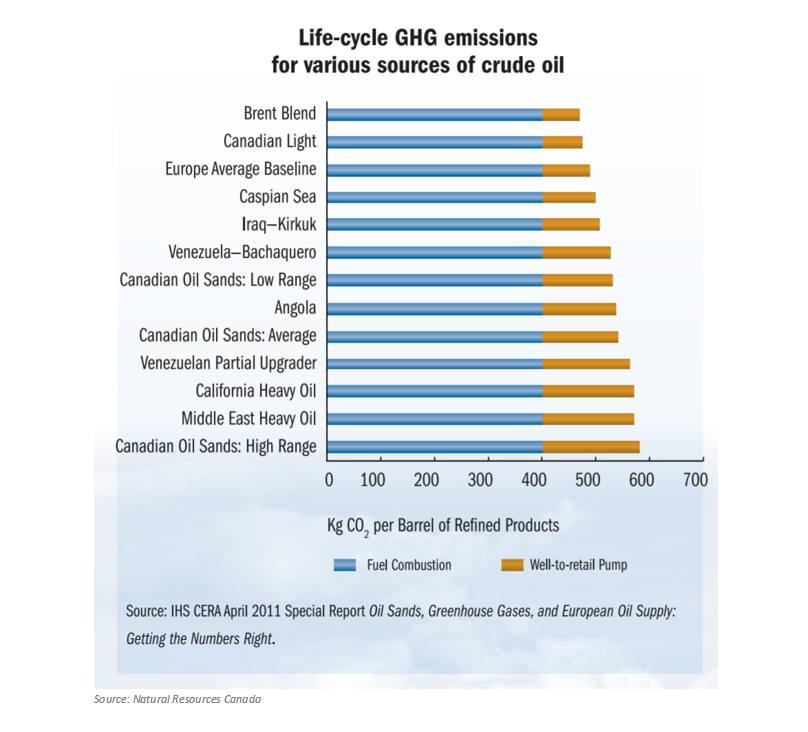 So where is the outrage over the other 80% of emissions that come when oil is consumed?

Well that would involve people looking in the mirror and changing their own behaviour.  According to the most recent Canadian government census data, approximately 80% of Canadians commute to work by private vehicle.  The most recent US census data shows similar number at around 86%.  Then there are all the other things that people enjoy that consume energy, like travelling on airplanes for holidays and or the food and consumer products that are shipped from all over the world.

Is the problem the oil companies, the pipelines or the consumers of the oil itself?

Unfortunately, pointing this out doesn’t resonate with environmentalists or the population at large.  Large oil sands operations with their towering smokestacks, enormous open pit mines and tailings ponds, as well as pipelines and oil tankers make much better environmental targets to rally against.  Pipelines that cross rivers, pass near lakes and coastal areas waterways make for an easy target for protest as they are a single point of risk.

There isn’t a simple answer to this issue, but focusing on only a small part of a problem while ignoring the rest doesn’t make much sense.

The paradox is that making the biggest source of emissions pay isn’t actually hitting the big oil companies with a tax on the product that they produce, it is hitting consumers for their end use.

For better or worse, Alberta’s new government will implement a new carbon tax (or ‘levy’ as they are calling it, perhaps to make it seem more palatable), that will take effect in January 2017.  I won’t get into a debate on the merits of this new carbon tax or weigh in on the science of climate change in this blog, I am simply looking into the math behind the changes that are coming on January 1st, 2017.  This tax includes an increase in gasoline by 6.7 cents per litre and diesel fuel by 8 cents per litre by 2018.  Natural gas for home heating will increase by $1.52 per GJ by 2018.  Fuels for cars and trucks are already heavily taxed, so the relative percentage increase in price to consumers is relatively small, at a mere 8%.  Natural gas, on the other hand, is not taxed nearly as much as gasoline and based on current spot prices of roughly $3 per GJ, the new carbon levy reflects approximately a 50% increase in price for the consumer.  The full effect will certainly hit home if we get a few cold months this winter.  Amount of the levy reflects a cost per tonne of emission of $30/t by 2018.  Prime Minister Trudeau has proposed a national carbon tax of $50 per tonne by 2022.  Working backwards, this equates to an increase in natural gas price of $2.55 per GJ or nearly double the current AECO spot price.

Looking across the country, Alberta is actually one of the most aggressive provinces in this regard and was the first jurisdiction to implement such a significant tax.  Whether this new tax/levy is effective remains to be seen, but changing the economic incentives will undoubtedly change people’s behaviour over time.  However, it is hard not to get cynical when it comes to this type of stuff.  Even proponents of implementing a carbon tax like Elon Musk, the CEO of Tesla, make the argument that implementing a carbon tax to encourage people to do things more efficiently should be offset by tax cuts in other areas so that the net effect is revenue neutral from a tax collection standpoint. See article here.

It seems that our government didn’t quite grasp the second part of the recommendation.  The other irony of the carbon levy in Alberta is that the revenue from the tax/levy is simply going to the provinces general revenue and not towards any further ‘green’ initiatives.  However, it is probably best that the province doesn’t get involved in directly funding power projects and spends the money elsewhere.

It seems hypocritical to me that it is the unofficial civic pastime in Vancouver to complain about the oil industry and protest pipelines, while at the same time the city suffers from some of the worst traffic in the country.  If people lived closer to where they work, drove sensible cars and did other things to alter their consumption patterns to use less oil, it is unlikely that the world would have ever needed to develop high cost oil, such as oil from the oil sands, in the first place.  If Canadian pipelines aren’t built and our oil can’t make it to global markets, then oil reserves in the other parts of the world will be developed to fill the market demand.  At least it isn’t in our backyard, right?  But would we rather support regimes from less favourable jurisdictions in the world, like the ones that don’t let women drive or vote or don’t care all that much about environmental regulations or land reclamation?

The math behind the issue clearly shows that approximately 80% of the emissions come when oil is used for transportation and on top of this about 80% of Canadians commute to work by car.  We should all think about our own use and lifestyles before throwing rocks at the ‘dirty oil’ from the oil sands.  It seems that there are more constructive ways to make a difference.  I could rant further on this issue, but I’ll stop here.  I’ll close by saying that this is an issue that certainly hits close to home as Calgary grapples with a 10% unemployment rate.