Developments in renewable electricity – Alberta’s 30% by 2030 promise… does it make sense?

On a recent flight back to Calgary I watched a movie called ‘Into the Heart of the Sea’ which is a film adaptation of the true story of the sinking of the American whaling ship ‘Essex’ and the plight of its crew that drifts in the lifeboats at sea for months.  The story of the Essex inspired the famous novel Moby Dick by Herman Melville.  At the time, whale oil was the preferred oil for lighting homes and street lights because the oil burns with a bright clean flame.  Whales were also abundant and people hadn’t figured out how to drill and produce oil out of the ground yet.  Not to be a spoiler on how the film ends, but the final lines involve a discussion between two of the surviving shipmates from the Essex about a recent oil discovery in Pennsylvania.

- “I just heard that someone discovered oil in Pennsylvania.  A farmer drilled a well and oil came out of the ground.”

- “And the oil just came out of the ground? That’s impossible…” 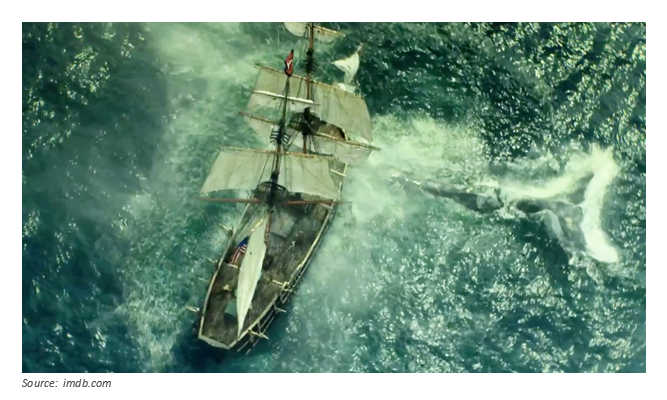 The conversation is clearly meant to foreshadow the demise of the whaling industry that would soon be replaced by the oil industry.  We all know how the story for whale oil ends.  Whales are now a threatened species and using their oil to burn for lighting seems horribly archaic.  Technology has progressed and we now have fantastic technologies like LED lights that use tiny amounts of power compared to older incandescent light bulbs.

Technologies for supplying energy have changed and evolved over time as well, but what is next?  Are we at the cusp of a change over from oil and natural gas to renewables?  Is renewable power ready for primetime?

The provincial government in Alberta recently announced that the province would have 30% renewable sourced electricity by 2030.  This sounds like a noble cause, but what will this actually cost?  The announcement was long on promises and short on details about how it this promise would actually be implemented.

The government’s plan doesn’t describe the framework on how this plan will be carried out or who will pay for what.  The announcement did trigger my analytical mind to dig into the numbers and do my own calculations to see if it makes any sense to make this promise at this point.  Using today’s technology for large scale solar and wind projects from other parts of the world as a proxy for what things would cost in Alberta, we can get a sense what this promise will actually cost.

Solar is touted as having unlimited potential with statistics like – ‘if we could capture 1/10th of 1% of the solar energy that hits planet earth, we would have 6x more energy that we use today in all forms.’  (Peter Diamandis – diamandis.com)

This sounds like an incredible way to supply nearly all of the earth’s energy needs, except for a few obvious drawbacks.  The sun doesn’t shine at night.  Clouds, fog, snow and other weather events interrupt the power that a solar panel can generate during the day.  Despite decades of research, the ability to store electricity at utility scale for low cost remains elusive.  However, technology marches on and continually improves, so if we ignore this minor detail and assume that someone clever, like Elon Musk, will figure out a large-scale and low cost electricity storage system in the next decade, it will all work out.

So how much does a large scale solar facility actually cost?  Statistics are widely available on some recently built solar projects.  If we use the world’s largest facility, the Topaz solar farm in the California desert, as a benchmark we should have a good idea of what a similar facility would cost elsewhere.  The Topaz farm is a 550 MW solar farm that completed construction in 2014 and cost $2.5 Billion.  Alberta’s grid has generation capacity of around 13600 MW today and assuming modest growth in population and power demand over the next decade and a half the power grid in Alberta should be at roughly 17000 MW to 20000 MW.

Therefore, to replace 30% of Alberta’s grid by 2030 with solar we would need about ten to twelve of these facilities.  So 10 times $2.5 Billion equals a $25 Billion price tag spread over 14 years?  That doesn’t sound too crazy…

Even in the sunniest locations, solar has a ‘capacity factor’ or amount of time on an average day that it is generating electricity of around 23%-25%.  If we could get this type of production from a solar farm in Alberta we would need about four times more production (and be able to store the electricity) to get to 24/7 power generation.  Alberta is at a much higher latitude with our long winter nights, rain, snow and other common weather events, so we could expect a solar plant here to be about half as productive as one in the desert closer the equator.

Factoring in the capacity factor for what we would actually get from a solar facility in Alberta we would need about 10x the peak capacity with storage to get equivalent base load power.  Keeping in mind that this is all hypothetical, I get to a cost of roughly $250 Billion to make the government’s promise happen using only solar power.  Putting this in context, Alberta’s entire provincial budget for 2015-2017 is around $50 billion in spending on all programs. (http://finance.alberta.ca/publications/budget/budget2016/fiscal-plan-complete.pdf)

Using simple math and spreading this cost across 14 years, it would still be equivalent to about one third of the provincial budget.  But the government won’t pay for this – private industry will right?  Not to sound cynical, but why would private industry make billions of dollars in uneconomic investments?  Investors simply wouldn’t show up unless there was an incentive to, like making a positive return on investment.  So the government would have to create an incentive program to get investors to come to the table…  therefore the government would be indirectly paying for these projects through subsidies and it would end up coming out of the pockets of the taxpayers at the end of the day.

The chart below from Credit Suisse research shows that a solar power project in Canada are roughly twice as expensive as a natural gas turbine, when used for peaking power.  (The chart below shows that solar power in Canada is 97% less cost competitive than natural gas).  The chart is a function of both natural gas input costs and available sunshine.  Canada and Russia fall on the far end of the chart with northern winter climates and cheap abundant natural gas.  Even markets like Saudi Arabia fall on the economic side of the chart for solar.  Although Saudi has abundant natural gas, they also have cheaper and more abundant sunshine. 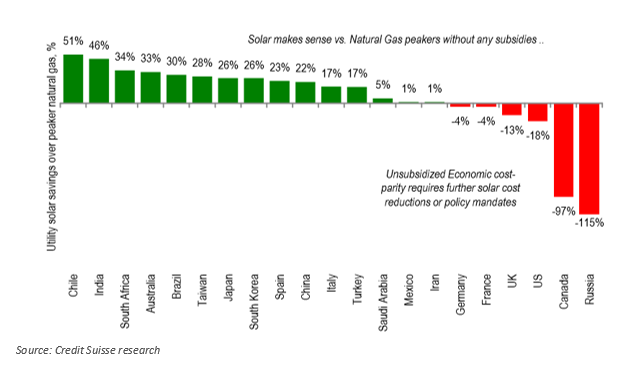 Isn’t solar coming down in price at an exponential rate?

In an earlier blog I discussed Ray Kurzweil’s prediction that in the next 15 years solar will be the dominant form of energy.  Perhaps the government has some foresight and sees that the price of solar panels is dropping by roughly half every few years, while the performance steadily increases.  This phenomenon has been termed ‘Swanson’s law’ and the chart below describes the trend. 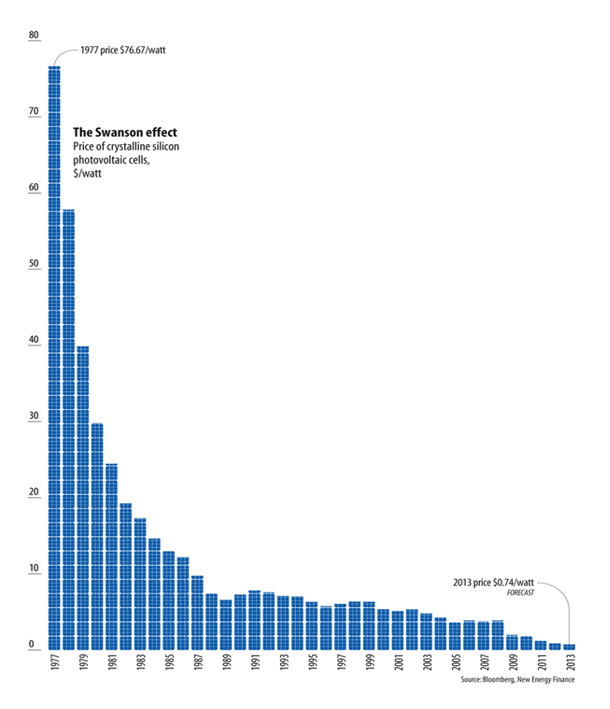 If we assume this trend will continue the costs should be fairly reasonable by 2030.  However, this chart is only for the cost of the panels themselves, and building a large scale solar project takes a considerable amount of labour and basic materials that tend to increase with inflation over time.

What about wind power?  Alberta is a fairly windy place, if we are going down this path of 30% renewables it would make sense to have a blend of solar, wind and other renewables.  Below is a chart of the trends in wind power costs.  As you can see costs have fallen steadily, but the rate of decrease is smaller in recent years and costs actually went up from 2004 to 2009.  Wind turbines are large physical objects that are limited in how cheap they can get by the cost of the materials and labour that it takes to make them and move them around.  It appears that in recent years, wind turbine manufacturers are bumping up against this limit and struggling to reduce costs and increase efficiencies above the current technology.

If we use one of the largest wind projects in North America, Oregon’s Shepherd’s Flat wind farm which produces 845 MW at peak output and cost $2 Billion dollars to build in 2012, as a proxy we should have a good idea of what a similar size project would cost in Alberta.  Assuming that a similar size project in Alberta would cost the same amount per MW and have a similar capacity factor of around 25%, we would need 24 of these facilities for base load power at a cost of $48 Billion to produce 30% of Alberta’s power with wind in 2030.  To put some context to the numbers, this is equivalent to Alberta’s provincial for an entire year spent on building wind farms if it were all to take place in one year.  This obviously won’t happen all in one year, although even spreading it across a decade is a significant bite out of the provincial budget.

It is tough to predict how these trends will play out.  The government’s feel-good promise is obviously for political gain and lacking substance.  Using today’s technology, the promise would likely cripple the finances of the province, however no one knows how quickly renewable technology will drop in price.

Why force this change?  Shouldn’t the market adapt and use the most efficient and cost effective technology of the day.  If the cost of solar is falling exponentially, it would make sense to wait until there is clarity on the economics of going down this path before making the promise.

I have read about solar coatings on glass that maintain the transparency, but simultaneously generate electricity.  This technology is currently under development but could be commonplace in a few more years.  Building products company Certainteed is currently selling a roofing shingle that also acts as a solar panel and blends in with a regular residential roof.  If you need to replace a shingle roof anyway, this could be a solution that pays for itself over time.  Solar and renewables may creep in to day to day life all on their own once prices fall and economics improve.

A promise with a 15 year time horizon is too short to hold up through four year election cycles.   Plans will change if and when government change power. This seems like one of those promises that could fall by the wayside with a change of government and by then it may not matter if the cost of renewables continues to fall exponentially.