Self Driving cars and the future of transportation

Self driving taxis, Tesla’s masterplan and other science fiction ideas that may be just around the corner.

The first fatal crash of a Tesla vehicle in self-driving or ‘Autopilot’ mode made headlines last month.  While the headlines were nothing short of sensational, it is worth digging into the details of the crash and looking at the facts.

What does this mean for the automotive marketplace?  Will you need to own a car when you can summon one on demand and have it take you where you want to go while you relax as a passenger. 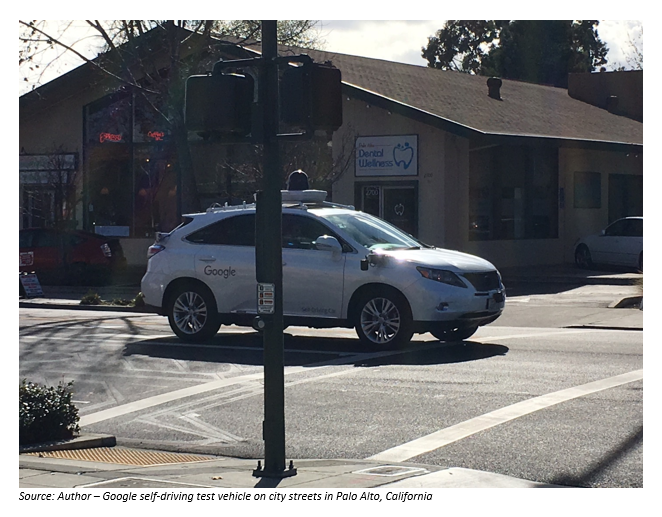 Discussing self driving cars is always an interesting conversation to have with people.  The reactions and opinions are widely varied, but most people tend to have some trepidation around the concept of not being in control behind the wheel.  But ask them whether they have any fear of flying on a commercial aircraft, and the same people generally say no.  Most commercial airline flights take place with the pilots only doing approximately 7 minutes of the flying, basically the take-off and landing.  In certain circumstances, like heavy fog, the flight computers can take over entirely and land the plane safely with no human input at all.

Driving a car is a complex and taxing activity, especially in urban traffic where there are any number of obstacles and situations to navigate.  Everything from cyclists, pedestrians busy texting (or playing ‘Pokemon Go’) or even dogs or other animals can appear out of nowhere.  Making a left turn in downtown traffic across the cycle-track lanes, pedestrian cross walks and oncoming traffics is an even more chaotic exercise.

From an engineering standpoint it is much simpler to design an autopilot system to fly an aircraft at altitude than to navigate urban traffic.  The Earth’s atmosphere almost always has about the same characteristics at an aircraft’s cruising altitude and other than aircraft that are tracked and avoided, it is unlikely that anything is going to appear suddenly and get in the way.

The Tesla ‘Autopilot’ system is described as a driver assist system and requires the driver to keep their hands on the wheel and stay alert and pay attention.  If the driver takes their hands off the steering wheel for a period of time the car will sound an alert and display a message to the driver to put their hands back on the wheel.  I have tried this system out and it does work quite well on the highway in steady flowing traffic or in stop and go type rush-hour traffic at a low speed.  Navigating urban traffic is still too complicated for this system to handle, as it can’t read and react to traffic lights or make turns for you. 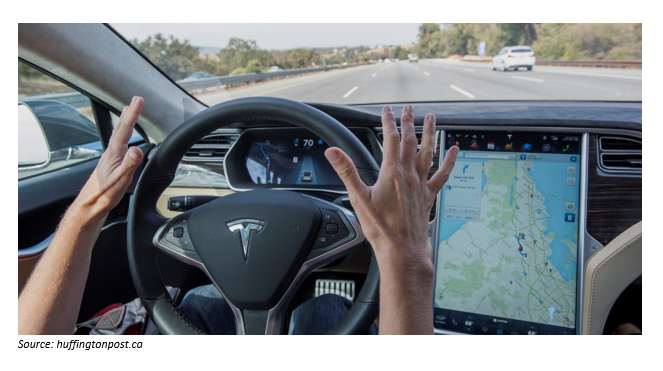 The details of the recent Tesla crash are somewhat sketchy.  Numerous reports stated that the driver was watching a Harry Potter movie on the car’s screen while the car was doing the driving.  Tesla has countered this and stated that this is impossible, as the car’s programming doesn’t allow it to play videos on the car’s screen at all, regardless of whether the car is moving or stopped.

The circumstances of the crash showed that there was an unlikely confluence of events where a semi-trailer truck was crossing a highway perpendicular to the flow of traffic right as the car was approaching.  The Tesla’s onboard camera didn’t pick up the white trailer against the bright sky and the radar component of the system didn’t sense the truck, as it was pointed between the space below the trailer and between the wheels.  The car hitting the open space between the wheels of the trailer didn’t allow the bumpers to make contact as they would have in a regular collision.

The crash was an unfortunate event and it does highlight the fact that no system is perfect.  Airplanes can crash, trains can derail and ships can sink; there isn’t any form of transportation that is totally without risk regardless of whether it is flown by a computer or driven by a human.

To counter the negative news regarding the Tesla crash, a recent news report detailed how a Telsa owner used the car’s autopilot to drive himself to the hospital while he was suffering a pulmonary embolism.  The car had a hand in getting him to the hospital safely and potentially helped save his life.  However, this story has only seen a fraction of the news coverage that the recent crash and fatality did.

Who are the leaders in the field of self driving cars?

The push into self driving cars is being lead by many of the leading technology companies, with the traditional auto makers falling behind or partnering with some of the large technology companies directly.  Google, Apple, Tesla and Uber all have all spent significant amounts on R&D in the automotive space.  Recently Ford announced that they will produce a fully autonomous car, with no steering wheel or gas pedals, by 2021.  Ford is looking to double its workforce of engineers devoted to this project and appears to be playing catch-up in this race with the deep pocketed tech companies.

Google’s approach involves a system that is built on top of an existing vehicle platform.  They are currently testing a modified Lexus SUV with a self driving control system built on top of the vehicle’s regular steering and brakes.  This saves the company from having to engineer an entirely new vehicle platform and they can focus only on the control systems and self driving software and hardware. Google is moving directly to perfecting a fully autonomous vehicle that would require no driver input, but making every effort to perfect their system before it is released to the public. 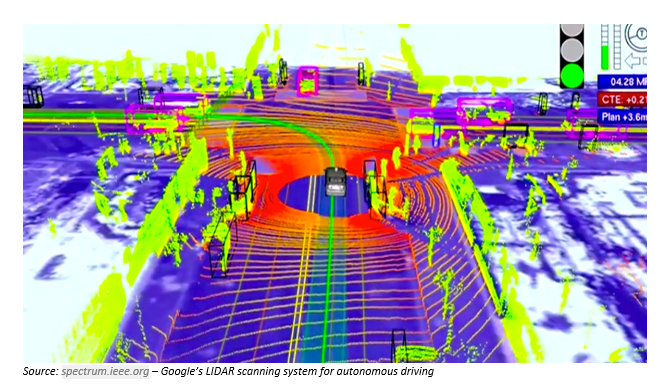 Tesla has the approach of using the data gathered from the current fleet of Teslas on the road to help perfect their autopilot system.  While the tesla system does require driver oversight, the data from the use of this system is regularly sent back to the company for analysis and continuous improvement of their systems.

Uber recently announced that they are running a test program of autonomous taxi’s in Pittsburgh.  While it sounds impressive, each test car will actually have two test drivers in the front seats at all times monitoring the vehicle and taking over in the event of emergency.   The reason that Uber is doing the test in Pittsburgh is that Uber has hired numerous researchers out of the robotics lab at Carnegie Mellon University.  Uber’s goal is to have 100 self driving Volvo SUVs on the streets of Pittsburgh by the end of the year. 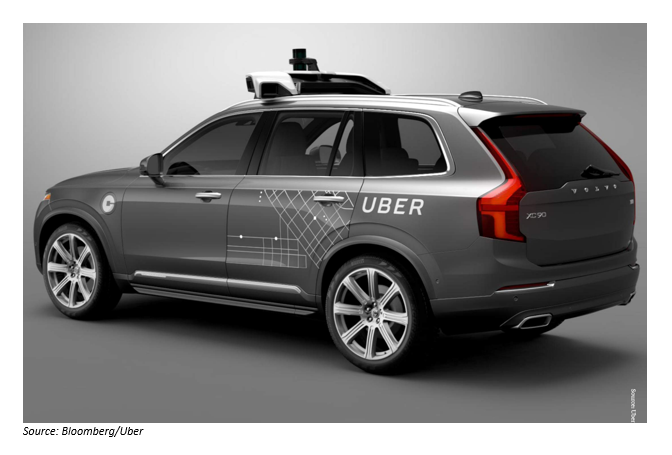 The last and most secretive of the big players in the space is Apple.  In the past few years Apple has spent $4.7 Billion on research and development in the automotive market.  This is more than the world’s 14 largest auto makers combined have spent on R&D in the connected car technology space in the same timeframe.  To put some context to the $4.7 Billion number, Fiat Chrysler, one of the five largest automakers in the world has a market value of around $USD 11 Billion.  Apple has spent nearly half of this amount just on automotive R&D, without yet releasing a single physical product.  This R&D spending is far more than Apple spent on the development of the Apple Watch, iPad and iPhone at $2B, $600 million and $200 million respectively, before the launch of these products.  Only those inside the company know for certain Apple’s plans, but clearly Apple wants its piece of the $2.6 trillion global automotive market. 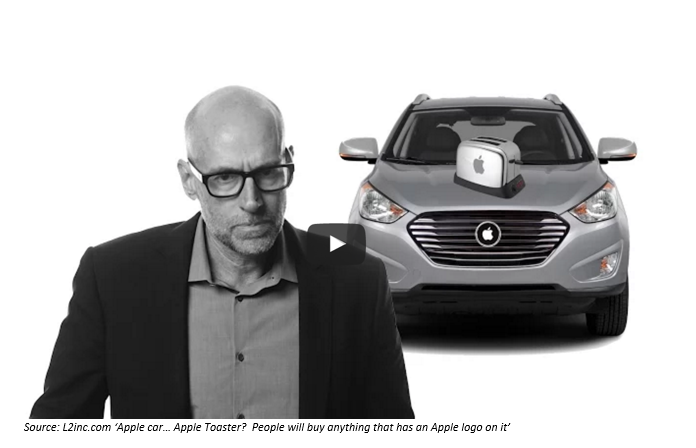 So, in short, Master Plan, Part Deux is:

The vision that Tesla and Uber have outlined is basically a world where you can summon a car with your phone and it will appear (driverless) and take you to where you want to go.  Tesla’s recently announced masterplan ‘Part deux’ has the goal of creating a world where your car can drive you to work and then go to work for you, roaming the streets on its own as part of a self-driving taxi fleet.  The idea is that most people only use their vehicles about 5% of the time and the rest of the time the vehicle sits idle either at the owner’s home or workplace.  If the car could drive itself around and run errands or move other people around it becomes a source of revenue for the owner and offsets the cost of ownership or even turns a profit.

Tesla states that if self driving technology achieves a level of safety that is 10x safer that manual driving, the argument for the technology is so compelling that the only ethical course of action for regulators is to approve it for widespread use (or possibly mandate that all cars have this feature).

Tesla recently completed the last step of their original ‘masterplan’ with the acquisition of SolarCity, becoming a fully integrated solar production/battery storage/transportation company.  Will they be able to accomplish everything that they set out to do in the second part of their masterplan?  Having completed their first masterplan from a standing start in about a decade, I wouldn’t bet against the company succeeding in their second act.

The opinions expressed in this report are the opinions of the author and readers should not assume they reflect the opinions or recommendations of Richardson GMP Limited or its affiliates. Assumptions, opinions and estimates constitute the author’s judgment as of the date of this material and are subject to change without notice. We do not warrant the completeness or accuracy of this material, and it should not be relied upon as such. Before acting on any recommendation, you should consider whether it is suitable for your particular circumstances and, if necessary, seek professional advice. Past performance is not indicative of future results.