We are living in a world where rapid technological change is disrupting even the most established businesses.  Looking at the world from an investment perspective, the phenomenon of rapid change and disruption adds an additional layer of complexity to the investment decision making process.

Is there such thing as an undisruptable company or industry?

While it would be nice to be able to invest in companies that aren’t subject to the competitive pressures of innovative start-ups coming in and eating their lunch or new technology destroying an established business model, it is obviously tough to predict the future.

Some common examples of companies being disrupted are Kodak and Blockbuster video.  With the advent of digital cameras, social sharing and on-demand video, both of these companies’ business models became quickly obsolete.

One ironic fact is that Kodak actually invented the technology for digital cameras in 1975, but failed to commercialize it in a meaningful way.  Their traditional film, paper and chemicals business was a cash cow at the time and it was a challenge for the company to overhaul their entire business.  One less known fact is that Kodak actually designed and produced an early consumer digital camera for Apple, but claimed no credit in the design or technology in the final product.  Even Apple didn’t have much success with their early digital camera attempts.  This was in the Apple era of the failed Newton handheld and other failed consumer products that marked the downturn of Apple in the mid 1990’s before Steve Jobs’ return.  The image below shows an early version of the Apple ‘QuickTake 100’ that could store 8 mediocre quality digital images or 32 even poorer quality digital images. 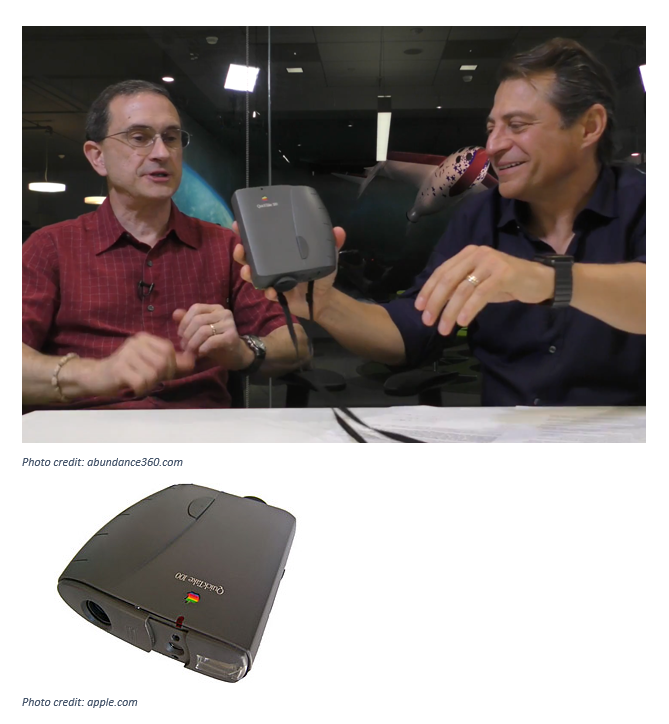 Even today, the leading digital camera companies aren’t thriving in the digital world, because nearly every smartphone produced today has a reasonably good camera built in.  This has all but eliminated the need for consumers to buy and carry around a separate camera, when they already have a good quality camera in their pocket.

It goes back to the old saying: “What’s the best camera?”

Answer: “It’s the one that you have on you when you need to take a picture.”

Looking at the Blockbuster video example, in 1995 nearly 90% of the home video sales/rentals were in the form of VHS tapes.  (Remember the fun of rewinding VHS tapes before returning them to the video store?) The introduction of the DVD displaced VHS tapes in only 6 years to the point where the DVD had approximately 90% market share.

While Blockbuster and their video rental shop peers had no trouble switching their inventory over to DVDs, once the content had been digitized the writing was on the wall for the inevitable decline of the rental market.  The DVD enjoyed its day in the sun for roughly a decade, but by 2005 things were set to change again.  The timeline for the elimination of DVDs coincided with the widespread adoption of high-speed internet and inexpensive digital storage and we are currently witnessing the rapid decline of physical media in general.  From 2005 to 2015 the market share of DVDs in the home video market has fallen from 95% to roughly 50% with the replacement being streaming video and purchased digital files.  The market share of streaming video from on-demand sources like Netflix and iTunes is likely to continue to grow in the coming years and all but eliminate the market for physical media.

It should be noted that in the past few years, the sales of vinyl records have nearly exceeded the sales of music CDs, as a strong niche market for the classic sound of vinyl records and the appeal of large format album cover art has re-emerged.  I suppose if you are going to own physical media it should be for the experience and classic sound.  Today the purchase of a vinyl record often includes the digital files as well, offering the consumer the best of both worlds.  Vinyl sales are still dwarfed by digital downloads, which are now being shifted to streaming music services, such as Apple Music and Spotify. 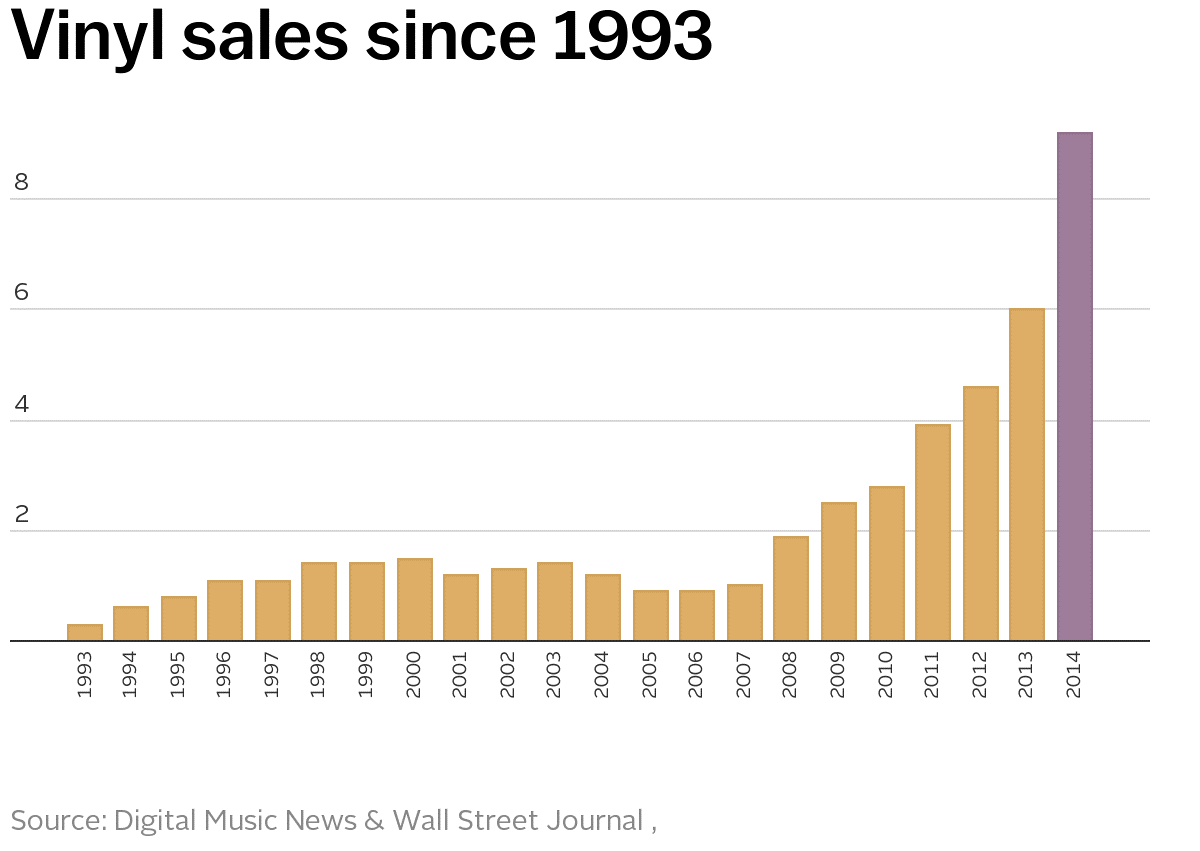 Is it better to invest in the disruptors or just avoid the companies being disrupted?

While efficient market theory would suggest that the effect of disruption is already priced in to stocks for both the companies being disrupted and the disruptors, this is not always the case.  A recent research report by Credit Suisse (Global Equity Themes March 2016) suggests that older and more established companies have outperformed their younger counterparts by 350 bps per year since 1980.  This is also shown in the performance of IPOs in the US markets in the past few decades.  For every Apple, Google or Facebook that continues to thrive, there is a Nokia, Blackberry or Motorola that has fallen from their dominant position.  I won’t even go into detail on the extreme examples from the early 2000s, but I’m sure everyone remembers Nortel, Pets.com and other ‘dot.com’ examples from that exuberant market for companies which were supposed to be the next big thing.  While it is nice to think that one will be able to find the next Facebook at an early stage and reasonable valuation, for every start-up that we remember making it big like Facebook or Google there are hundreds that fail (remember MySpace?).  Even if you could find the so-called ‘unicorn’ company would you even be able to invest in it at the right time?

Are there certain segments of the economy that are immune to or at least less vulnerable to disruption?

With companies like Amazon and Alibaba steadily squeezing the margin out of traditional bricks and mortar retail, AirBnB taking a share of the hotel business and new forms of peer to peer lending taking away from the traditional dominance of large banks, it seems like few sectors are immune.

So where to invest?

The sectors that stand out as less prone to disruption are real estate, household/personal products, transportation and food and beverage.  All of these sectors meet a basic societal need and it is obviously less likely that any type of new innovation will significantly change the way people eat, for example.  Anecdotally, there is a California start-up called ‘Soylent’ that makes a ‘meal in a bottle’ type of drink that is supposed to meet all of your nutritional needs.  Ingredients include soy protein, algal oil, isomaltulose (whatever that is?) as well as added vitamins and minerals.  While this might sound like a good concept to some, for a few reasons it lacks personal appeal.  I enjoy eating a well prepared meal with fresh ingredients and I don’t think that I will be incorporating ‘Soylent’ or anything similar into my diet any time soon.  Nutrition and meal replacement drinks, shakes and similar products have been offered over the years and none of them have taken over a significant part of the grocery store shelves.  Most grocery stores have entire aisles of chips and sodas and only small sections devoted to nutrition bars and drinks.  It is obvious where consumer preferences stand. 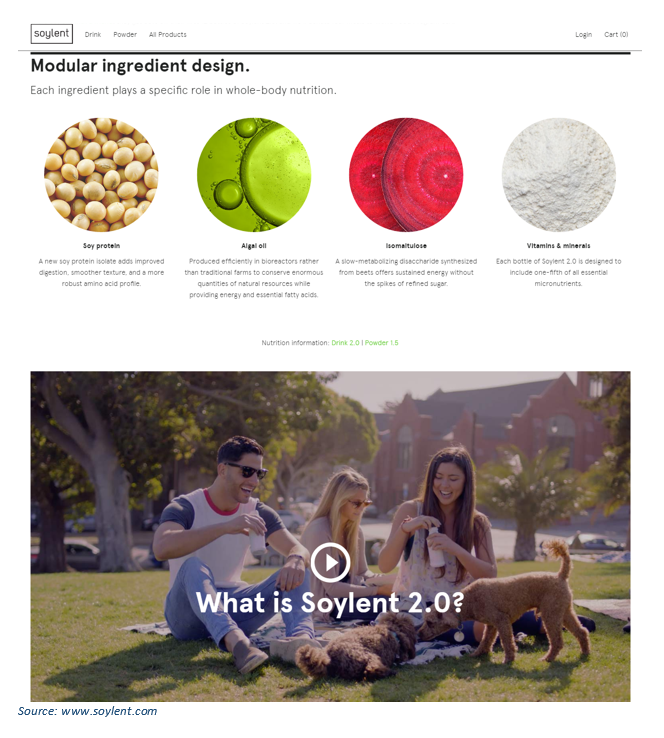 Following Warren Buffet’s recent investments, it would appear that he tends to agree.  In the past decade, Buffet’s Berkshire Hathaway has invested in BNSF Railway, Heinz ketchup, Duracell batteries, Tim Hortons/Burger King, real estate brokerages as well as pipelines, electricity transmission and other basic infrastructure.  As an investor who professes to invest only in businesses that he understands, Buffet tends to avoid the more volatile sectors like technology and pharmaceuticals, where a new technology or pharmaceutical compound can come seemingly out of nowhere and quickly disrupt a market.  It is tough to argue with the long term track record of Berkshire as one of the top performing companies in the US markets in the past 50 years.  That said, Berkshire did recently disclose a stake in Apple in their portfolio of public stocks, so perhaps this is a small step away from their traditional philosophy.

What about oil and gas? –will we always need these products or will solar become the dominant form of energy in the next 20 years, as Ray Kurzweil predicts?

Perhaps one day the entire world will transform into some sort of ‘green-powered utopia’, where everyone can ride around in self-driving electric cars that are powered exclusively by renewables.  If or when this ever becomes reality is anyone’s guess.  In the near term, the drop in oil prices has spurred a significant increase in driving miles and SUV sales in North America, suggesting that most people are fairly content with the status quo and respond to market forces of supply and demand.  The energy industry is in the process of disrupting itself with the advent of horizontal drilling/fracking on the supply side and energy efficiency gains on the demand side.

Is there such a thing as a company or sector that is truly ‘undisruptable’?

Probably not, but there are some sectors that are at least less prone to it.

This blog isn’t intended to offer any specific stock tips.  Market forces, stock prices and valuations are always changing and everyone has their own investment goals and risk tolerance.  While it might be fun to play in the world of start-ups and early stage companies with a portion of your investment dollars, it is important not to ignore the survivorship bias.  We hear plenty about the successful disruptors that have made it big, but hear little about the ones that aren’t around anymore.

Following the lead of sage investors like Warren Buffett and sticking with businesses that have a long track record of success and that are likely to fend off competitors in their industry, has proven to be a sound investment philosophy in the long run.