The Canadian version of Dutch disease

As the price of WTI shrinks and the price of Western Canada Select (a heavy crude blend in Alberta) drops even faster Canadians might be wondering what happened to our prosperous nation that was regarded by the world as a “safe haven” for investments and a wonderful place to live, if you don’t mind a few months of frigid temperatures and people who are constantly apologizing. I’m sorry to suggest that Canada’s economy might not be in perfect shape.

Some might even think back to that story about Dutch disease and wonder if that bearded politician might have been right. Here is the article that got him into so much hot water.

So what is this thing called “Dutch disease”? The term refers to what happened in 1977 in Holland. There was a major discovery of natural gas in the Netherlands section of the North Sea. Incomes rose due to the rising price of the commodity, and the currency soared. As a small country beside their big brother neighbour, Germany, exports were key to the non-energy segment of the economy.  But the rise in wages due to the well-paid employment in natural gas production and the increase in the Guilder/Deutschemark exchange rate meant that exports from the Dutch manufacturing sector atrophied. Germans could make the products within their own borders at a lower cost than imports from Holland and they’ve been doing that ever since. The manufacturing jobs never came back to the Netherlands even after the natural gas boom ended.

Is there a parallel with Canada as Holland and the US as Germany? Yes, it seems clear that, in Ontario’s important auto manufacturing sector, many jobs have moved south either to Detroit or to the Southern US or especially to Mexico. The numbers are staggering as more than 500,000 jobs in manufacturing have been lost since 2000 while the oil and gas, mining and quarrying sector rose by 30 percent approximately. In the fall of 2014 Stephen Poloz Governor of the Bank of Canada stated that some parts of manufacturing have lost as much as 75 percent of their output.

Some people mistakenly believe that Dutch disease is just a function of the exchange rate of the Canadian dollar to the US dollar. If only that were true because that would mean that the loss of jobs could be corrected simply by engineering a decline in the Canadian dollar to put things back to where they were. Jobs would reappear and all would be good. But just a lower Loonie alone won’t be enough as the differential would have to be permanent and manufacturers would have to be convinced of that. That’s unlikely to happen.

Here is a copy of a graph from an IMF report that shows how serious the problem is: 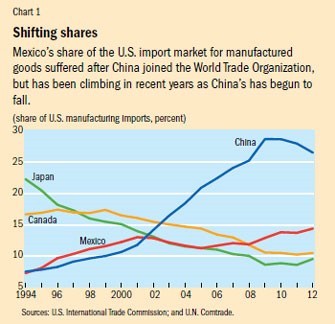