A worldwide food crisis is happening

The world is in a food crisis that will affect everyone. The inflation in crop prices is threatening to trigger widespread starvation in some poor countries. Grain producers will benefit from strong prices and increased demand for their exports.

Russia, United States, Ukraine, France and Canada are main exporters of wheat in the world. Input costs for these crops are rising rapidly as fertilizer and diesel prices soar.

The war in Ukraine will affect crop production this summer. And in Russia, unaffected so far by bombing, the sanctions imposed by the west will have an impact on the volume of exports.

Russia is the world’s leading exporter of fertilizer. In the past year the price of ammonia fertilizer has tripled.

Shortages of other key supplies for farming are appearing. Glyphosate, for example, is used for corn and soybean in the US, is under restricted availability at key suppliers.

Some large countries, like India, are very dependent on imports of agricultural products. Oilseeds are a necessity for that country and Ukraine exports 34 percent of the world’s supply, according to Grant’s Interest Rate Observer.

The price of food is increasing at unprecedented rates. Food costs 36 percent more than last year, according to the FAO Food Price Index published by the UN. To some people who have little or no discretionary income, this could mean starvation. 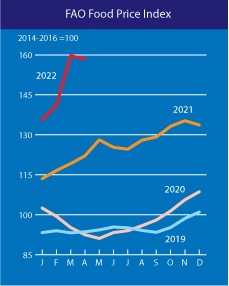 And it is not just grains. Dairy prices are up 23 per cent from last year worldwide and vegetable oils even more.

Here is the full list of categories going back to 2004: 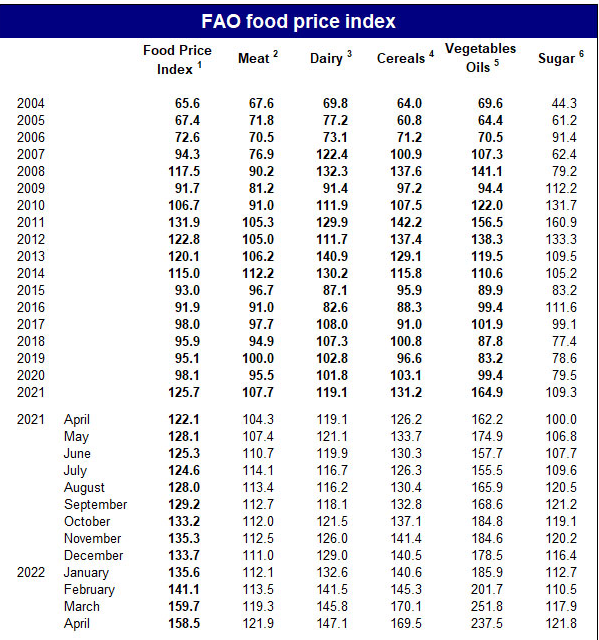 This week the US reported the “producer price index” gained 11 percent from last year. Producer price changes occur at an early stage in the chain of production guaranteeing that consumer goods prices will reflect similar gains in a few months. CPI came out this week at 8.3 percent.

Fertilizer prices have surged to record highs, doubling and tripling in most cases. Nutrien, based in Saskatoon, is a world leader in fertilizer production. Nutrien’s competitors are based in Russia and Belarus. Those countries are under sanction and normally supply 40 percent of global exports of a key ingredient, potash. 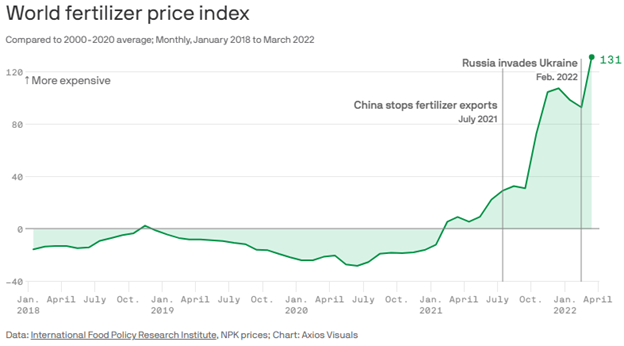 But if input prices are too high some farmers will not plant crops or reduce the size of their plantings.

The president of the World Farmers’ Organisation said, “Many fields are not being planted. I’m not sure it’s possible to avoid a food crisis.”

In the US President Joe Biden visited a family farm near Chicago Wednesday and highlighted food inflation in his remarks, obviously worried about Congressional elections in November. US grocery prices are up 11 percent from last year.

In the rest of the world, especially in Africa, the food crisis could lead to starvation, unrest, rioting and even revolution.