Housing bubble in Canada one of the biggest

Canada has one of the largest housing bubbles in the world, according to Bloomberg Economics. The top 3 countries at risk are New Zealand, Canada and Sweden.

The warnings signs are as intense as they were in the run-up to the global financial crisis in 2008, according to Bloomberg.

Until now, Bloomberg news has been consistently positive on the Canadian real estate market. So this report could signal a shift in attitude there.

I appeared on Bloomberg TV in NYC in October 2016. There were three interviewers and they put me through quite a grilling, and their skepticism on the housing bubble thesis was apparent. Watch here: “Is Canada’s economy on the verge of a financial crisis?”

As it turned out I was very early in my call for the Canadian housing bubble to burst and trigger a financial crisis.

But now, four years later, Bloomberg has revived the story, and Reuters has reported on the topic too.

This table from the June 15 Bloomberg report shows where Canada and other countries stand: 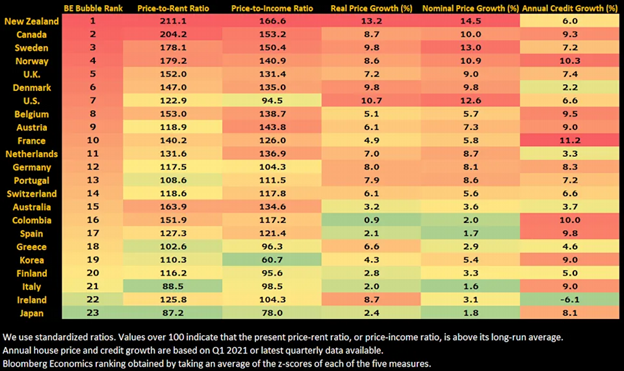 As impressive as this table is, showing Canada near the top, it leaves out long-term considerations such the absolute size of household debt and the price of housing compared to other countries and compared to the same country in the past.

The size of countries is important when talking about triggering a new financial crisis. Canada has about 38 million people, while the other two, New Zealand and Sweden, have 5 million and 10 million, respectively.

The US, UK and Canada together are more than large enough to trigger a financial crisis, if their respective housing bubbles were to burst at the same time. But the UK and the US are very different from Canada in one important respect.

In 2008, all the banks in the UK save one, Barclays, became insolvent. And in the US, the two biggest organizations dealing with housing — Fannie Mae and Freddie Mac — became insolvent with trillions of dollars involved. Others such as Merrill Lynch, Citigroup, Goldman Sachs and AIG either took help or needed a bailout.

Although the Canadian financial system was also under substantial pressure, help from the Insured Mortgage Purchase Program and credit swap lines from the US central bank, the Federal Reserve, allowed Canadian banks to muddle through without any insolvency or failures.

While some observers point to this positive experience during the crisis as proof that it can never happen in Canada, others believe that it is unfortunate that Canada did not go through a crisis. At least in the US, and other countries, private sector debt was substantially reduced, and house prices came down.