Higher inflation now would be a genuine surprise to markets. Equities and bonds are priced as if low interest rates, even negative ones, will last for years.

But recent data show that inflation might not be dead after all.

Could inflation rise? What would happen to markets?

In the early years of my career inflation was hot. Rising prices as measured by the CPI were above 10 percent annually in the early 1980s, pushing interest rates up to 15 percent on long-term bonds as the Volcker Federal Reserve tried to get inflation under control. Since peaking in 1981 inflation and interest rates have trended lower. Recently interest rates went to negative values in some countries while inflation became a non-issue.

For equity markets the inflation rate and long-term interest rates are a proxy for the discount rate for earnings in future years. When inflation and interest rates were above 10 percent, the impact on share values was extremely negative, as owning shares had to compete with government bonds that produced substantial income every year. In other words, if investors could not get their money back with earnings and dividends quickly, they were not interested in holding shares. 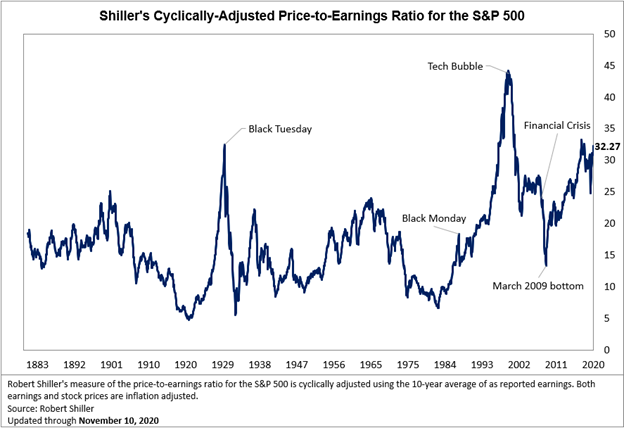 The Shiller CAPE value today is close to 32, while in 1982 it dipped to about 5, as it did in 1920 and 1932. A dramatic rise in inflation and interest rates now would impact the Shiller ratio, forcing it lower. The key factor in pushing interest rates higher would be rising inflation.

What would make inflation rise? The election of Democrats, in the Presidency and the House of Representatives, makes it likely that new government policies will be enacted that would push inflation higher. A record fiscal deficit, along with rapid growth in the money supply – M2 was growing at a record high 23.7 percent recently - could set the conditions for higher inflation. The negative view regarding Chinese imports could lessen their deflationary impact. A higher minimum wage is likely along with programs to push more government spending into the economy.

One classic cause of higher inflation is too much money chasing too few goods. While we do not know yet if this will happen, the risk is there.

Investors can avoid investments that are vulnerable to higher inflation. The most exposed security would be long-term bonds where yields are very low. An increase in interest rates would depress bond prices.

The US 30-year government bond was 1.73 percent recently, while the Canadian equivalent was trading at 1.33 percent. The German 30-year yield was negative, at -0.05 percent!

The average 30-year bond rate for US Treasuries has been 4.95 percent over the last two decades. If the bond market demanded a yield of 5 percent on 30-year bonds, the price would have to fall by about 51 percent to push the yield to 5 percent.

A loss of half of the value of a bond portfolio is something to avoid. The stock market would get hit also.

Investors need to worry about inflation.