Trillions in government spending to combat the recession

The world is in the most severe recession in decades. Economist predictions see a recovery later in 2020 or in early 2021, but even with a robust recovery this downturn is more severe than any of the recessions since 1945.

Stimulus spending has been announced in all regions of the world, with the goal of counteracting the negative impact of elevated unemployment and shrinking GDP.

Which countries are leading? Which programs are most effective?

Most countries have announced measures designed to support the economy in this unprecedented slump. So far the stimulus worldwide is approximately 3 times larger than the response during the Global Financial Crisis (GFC) in 2008-09, according to McKinsey and Company.

The total in U.S. dollars is about $10 trillion (T), with Western Europe far ahead of the rest of the world at about $4T. The spending includes everything from loan guarantees and subsidies to cash payments directly into bank accounts.

McKinsey contends that the “liberal-market economies”, including the United States, Canada, Australia and the United Kingdom face “greater shorter-term risks” because they rely more on the private sector and less on government-led coordination as is practiced in China. European countries fall between those extremes.

The massive Western European effort, valued at about $4T, is led by Germany. There is also a pan-European proposal to stimulate the economy but getting approvals for an EU-wide effort is difficult with active opposition from Germany, Austria and a few others. But even without the EU package, Europeans will be leaders in government spending to combat the effect of the recession, expected to reach about 7 percent of GDP in Germany.

But size is not the only metric to consider. For example, the stimulus packages post-2008 during the GFC implemented by the U.S. concentrated on bailing out large banks, GM, Chrysler and Wall Street firms but provided little relief to average workers who lost their jobs and their homes.

If the COVID-19 recession runs for the same time as a typical severe recession, up to 18 months, then someone should be thinking about where the government stimulus money is targeted. After all, “Never let a good crisis go to waste,” is a wise saying attributed to Winston Churchill.

So, governments would be well-advised to demand that the stimulus dollars go to something both productive and transformational.

Again, Germany is leading the way by making conditions on how the money is spent. At the top of the list of spending in the package are initiatives that target “green programs.”
A package of 130 billion euros was announced in late June with about 26.4 billion going to “green” initiatives.

About 1/3 of that (euro 9 billion) will go to hydrogen infrastructure, which will make Germany a player in hydrogen-fueled transport and industry although China is still far ahead.

Another important element is support for auto makers to make electric vehicles. Both programs are designed to help Germany’s largest sectors ­-- steel, chemicals and car-manufacturing -- make the difficult transition from old technology to new. 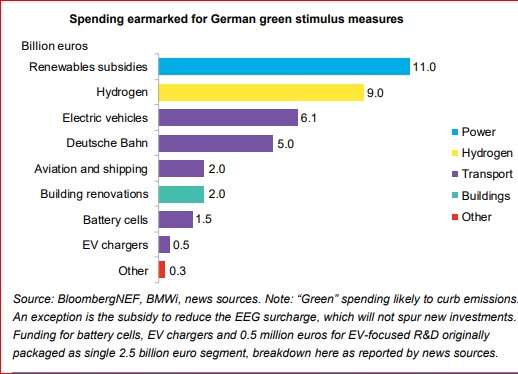 Only time will tell if Germany’s targeted approach to stimulating the economy is the right path to take. If it works as intended and other European countries copy Germany’s lead, this recession will be transformational for Europe.