Shopify surpasses RBC on the S&P/TSX

Investors in Canada, and elsewhere, are watching with fascination as Shopify, an Ottawa-based company founded by former snowboarder Tobias Lutke, grows to become the largest company by market value in Canada.

Will Shopify be the next Amazon?

In full disclosure I do not own Shopify (SHOP) or Amazon (AMZN).

Shopify’s performance on the stock market has been spectacular, although its financial results are similar to an early-stage technology company with rapid growth in sales and expenses but no profits.

I was aware of Amazon from the early stages of its growth when selling books online was its main activity. I didn’t invest in Amazon in those early days as the shares didn’t meet my value criteria. I now consider it “the one that got away”.

Is Shopify the next Amazon?

Amazon is worth more than $1 trillion. The company occupies a top-3 spot in the S&P 500, accounting for 4.27 percent of the index, just behind Apple and Microsoft. Jeff Bezos is the richest person in the world at $148 billion.

Amazon dominates online sales and is also the leader in cloud computing, where Amazon Web Services generates about 40 percent of company profits and represents about one-half of the company’s value.

Shopify, like Amazon, has risen to a prominent position in the stock market. At March 31, 2020 SHOP occupied the sixth spot in value in the Canadian S&P/TSX Composite Index. Now, five weeks later, the total market value of SHOP is $85 billion and briefly passed the leader, The Royal Bank of Canada. Most of the companies that have outdone Royal Bank’s value such as Nortel (bankrupt), Valeant (Bausch Health), Encana (Ovintiv) and Research in Motion (Blackberry) are infamous for their “flash in the pan” status. 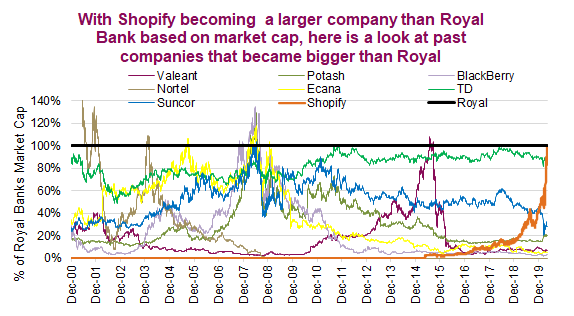 SHOP operates in online shopping but with a much different business model from Amazon.

Shopify gets most of its revenue from serving businesses, many of whom are start-ups. The SHOP platform facilitates sales between buyers and sellers with its software-as-a-service offering but does not make sales. Shopify has started to serve larger merchants, but that is difficult as most are large enough to have internal ecommerce platforms.

The small and medium sized businesses that use Shopify prefer it because it offers a turn-key solution for them, on a subscription basis. The company is expanding into payment and shipping solutions. Shopify charges transaction fees for every sale, ranging from 0.15% to 2.0%.

Shopify, at its core, is a subscription software service, which allows merchants to go online quickly, with minimal investment and knowledge.

SHOP trades at 20 times annual sales, while Amazon is trading at about 3-4 times revenues.

In this recession many of Shopify’s small customers will go out of business, as start-ups often do. Retail sales will decline, although online sales will increase market share.

But in the currrent uncertainty over health, finance and jobs, consumers are moving to save more and spend less. This trend, expected to last a year or two, will hurt retailers.

After the recession ends, perhaps in early 2021, we will see if Shopify weathered the storm. But, for now, Shopify is not comparable to Amazon, past or present.

For now, Amazon is still the next Amazon.