The OPEC era is over

The oil supply cartel known as OPEC continues to self-destruct.

With the announcement that the Saudi-led group of oil exporters could not reach agreement with Russia the price of oil collapsed.

Will OPEC ever regain control of the oil markets?

In my weekend note on December 31, 2014 I wrote that OPEC was struggling with a worldwide oil glut. The Saudis were tired of cutting production to put the market into balance, allowing other non-OPEC producers like Canada, Texas and Russia to increase production. This Monday, the crude oil benchmark, West Texas Intermediate (WTI) and Brent, the European benchmark, both fell by around 30 percent to levels not seen since 2009.  The low price on WTI was around $27 while Brent bottomed at about $31. 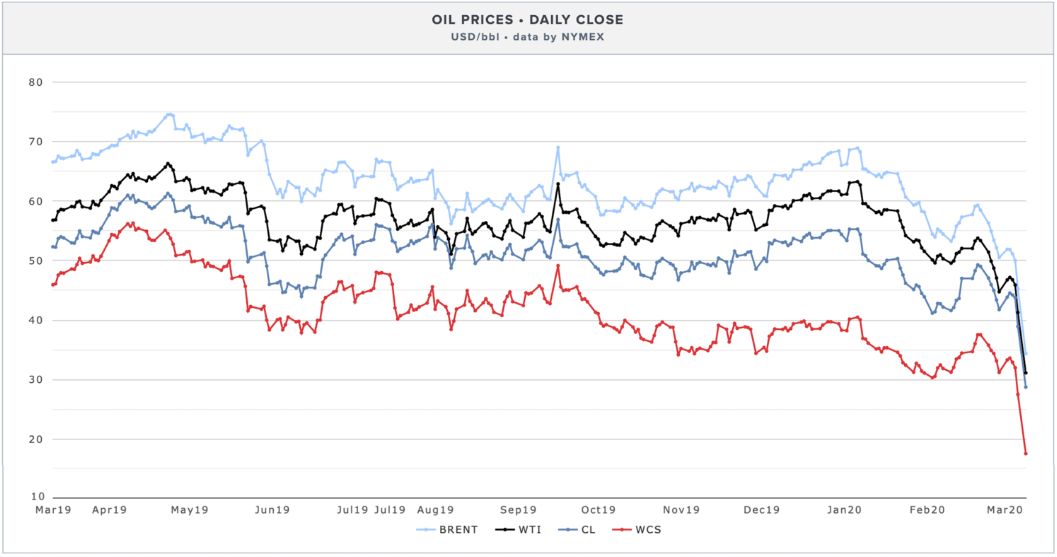 At these prices much of the world’s oil production is not profitable. A region with high-cost production, the Northern Alberta oilsands, is relatively expensive. When WTI hit $30, the Western Canada Select price dropped to $17. These prices are disastrous for Alberta and Canada.

The market’s worry this week is U.S. shale oil operators, where heavy debt loads have analysts predicting imminent bankruptcies for several of the producers.

The reality is that the world was awash in oil even before the COVID-19 crisis lowered demand. In my December 2014 note I wrote that “petroleum product demand among OECD countries has been flat for five years”. The decade-long flat demand in developed countries is now true globally, due to weak demand in China because of the pandemic.

Once the pandemic ends, demand could rebound. The International Energy Agency (IEA) has been constantly bullish on total global demand for oil. In its March 2020 report the agency predicts that China demand will fall by 1.8 million barrels year-over-year, and global demand by 2.5 million barrels but this decline is blamed on COVID-19 and is expected to be temporary.

Production remains strong at 100 million barrels per day prior to the OPEC meeting. With the announcement on March 10 by the Saudis that they are increasing production to 12.3 million barrels, a surplus globally became inevitable.

The global storage situation is bearish also, as there are record amounts of crude oil held by producers. Iran has a significant amount, as sanctions imposed by the U.S. made it difficult for them to sell all they produce. The demand for oil tankers to be used as floating storage jumped.

According to Gregor MacDonald in his recent Gregor Letter “the oversupply problem has been building in oil for the past five years, and now the truth is bursting forth, leveling the market’s precarious structure.” He suggests there will be a paucity of new demand coming, so producers needed to control supply. And now the producers have failed to agree on cuts.

On Monday the shares of Cenovus Energy declined more than 50 percent in value while Ovintiv, once called Encana, declined by more than 70 percent. Suncor, the bigger company that owns the largest piece of oilsands production declined by about 20 percent.

The magnitude of these changes in stock market value gives a good indication that the oil price drop won’t be temporary. The demand for oil is flat, and could even decline, while supply is growing and the oil glut in storage will last beyond COVID-19.