President Trump has a chance of winning

President Trump’s reelection chances in November 2020 are better than some people think.

The incumbent president usually wins when going for a second term, if the economy is in good shape.

Will Donald Trump win a second term in 2020?

There are several influences that will impact the results next November. One of these is the impeachment process, which seems to have had little impact, so far, on Trump’s prospects for electoral success.

There is no doubt that House Democrats will proceed with impeachment, so there will be a trial in the Senate. In the Senate, Republicans will run the trial and a 2/3 majority is required to remove a sitting president from office. Given that the GOP hold the majority at 53 (of 100) seats, it would be very difficult for Trump to lose a vote on partisan lines. About 20 Senators sitting as Republicans would have to vote against the GOP to convict Trump. This seems unlikely, unless there is more scandal that turns voters against Trump.

Trump’s job approval ratings have barely budged over the last month, which is surprising given the developing story over withholding funds designated for the Ukraine to help fight a war with Russia. Witnesses testified that Trump was involved in some way with trying to get a quid pro quo from leaders in the Ukraine in exchange for sending funds that Congress had authorized. But the public hasn’t heard anything yet that would turn a large number against Trump.

Other than impeachment, the biggest factor in the election will be the economy, which is key to Trump’s chances. If people feel that the economy is doing well, then Trump has a decent chance of winning.

His approval rating at this point in his first term is one of the lowest of previous presidents who went on to win a second term. Trump cannot afford to go lower in approval ratings, especially in key states that will determine an electoral college win.

While Trump’s approval rating among Republican voters is very high, his overall approval rating isn’t very different from presidents who failed to win a second term. Two examples are Jimmy Carter in 1980 and George H.W. Bush in 1992. Bush entered 1992 with 46 percent approval but lost the election. 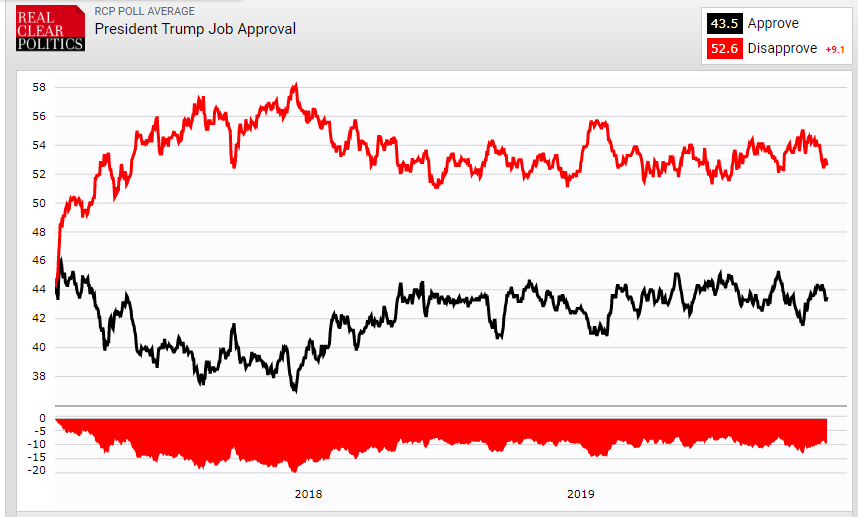 President Obama’s approval numbers at the same point were similar, while President Reagan’s rating was 45 percent. All that Trump needs over the next six months is an improvement to 46 percent in order to have a good chance of winning, but he hasn’t been that high recently.

The economy is in the late stages of a very long cycle that started in 2009. The recovery has been the longest on record but also the weakest. Unemployment is at record lows, but the participation rate is lower. High-paying jobs have been replaced by part-time or gig jobs.

The yield curve inversion, where short-term T-bill yields are higher than long-term, happened months ago. This indicator is a reliable predictor of recession with a lag of twelve months. 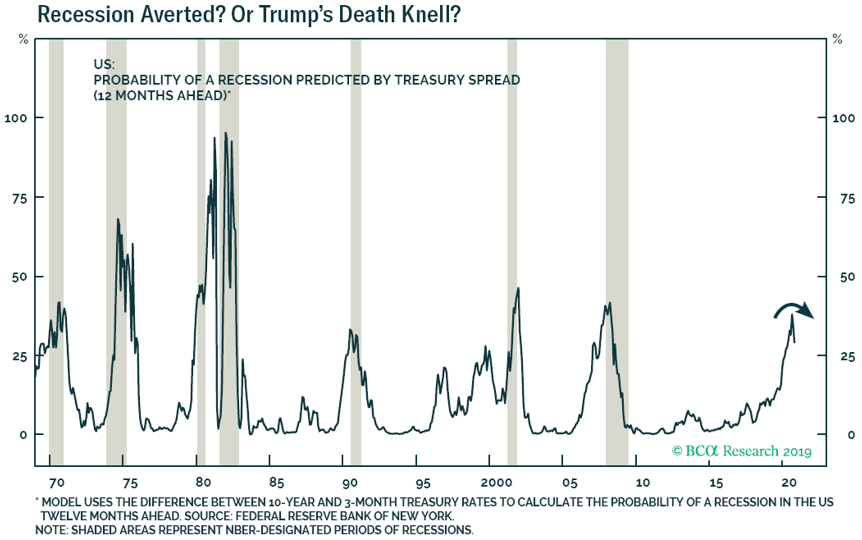 A temporary resolution of the trade war with China would help avert recession. But settling the trade war is risky for Trump, if he appears to be backing down. Keeping the economy from sliding into a recession next year gives Trump a chance. But winning will be his most difficult challenge ever.

Whether Trump wins or loses could have a significant impact on the US stock market. That question will be examined in a future post.