Tesla came up short for the second quarter, in the eyes of Wall Street analysts who forecast earnings. On other measures, the company succeeded by shipping a record number of new cars and announcing the highest amount of quarterly free cash flow in its history.

Bears, usually short sellers, are very vocal on social media, while no company has a more devoted group of followers, most of whom drive the car and own shares in the company.

Is Tesla going to fail? Or will it transform the automotive world?

In full disclosure, our family owns two Tesla cars, a Model S bought in 2017 and a Model 3 purchased in 2018. The 2017 Model S replaced an earlier Model S which I bought in early 2015. I also own some shares in Tesla.

Most stock market analysts are skeptical of the company, and are critical of the founder and CEO, Elon Musk. Musk has made statements on Twitter and elsewhere that show questionable judgement, landing him in hot water with regulators more than once. And his April 2019 promises about fully autonomous driving and robo-taxis being available by the middle of 2020 do seem far-fetched. On the other hand, he is, without doubt, an engineering genius with a track record of success in several ventures such as Tesla, PayPal and Space-X.

Second quarter results showed a larger loss than expected, and the stock reacted negatively, but contained positive news with an improvement in free cash flow to a record $614 million, a swing of $1.5 billion from the last quarter.

The largest number of total combustion-engine sales for all models from one company came from Volkswagen, at 11 million. Volkswagen recently announced plans for a big push into electric vehicles, and Tesla nay-sayers point to new models from that company and others as tough competition for Tesla. But, so far, Tesla is still the world leader in battery electric (BEV) vehicles. And Tesla has a decade-long head-start in producing BEVs.

Europe will be important for Tesla, where gasoline costs are very high, and already the Model 3 is beating some of the most popular combustion-engine premium sedan offerings from Mercedes, BMW and Audi (Volkswagen): 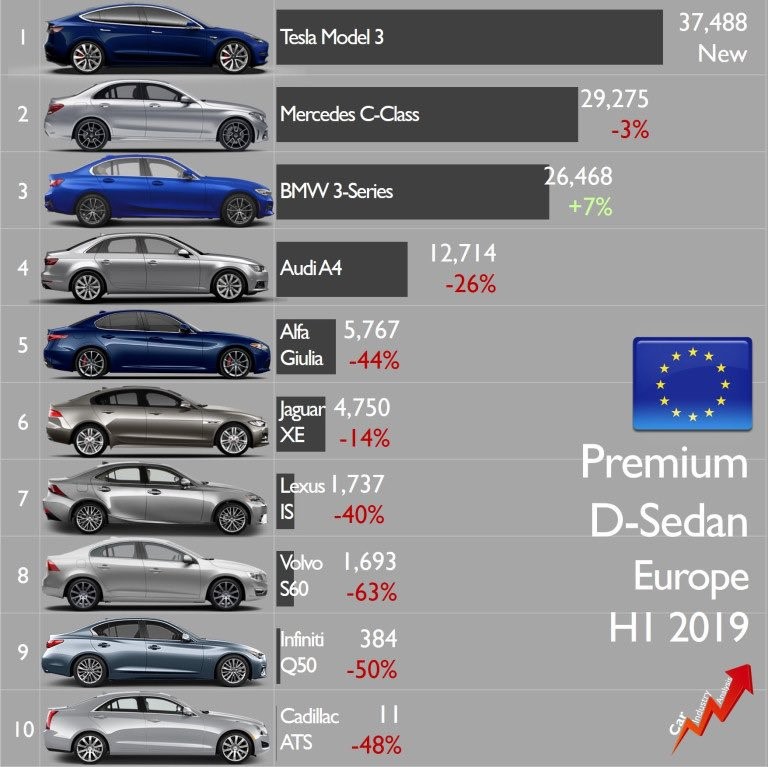 Elon Musk confirmed that the new crossover utility model, the Y, will be built at the Fremont, California factory. The Y is classified as a compact, crossover sport utility vehicle, a very popular market category. Model Y sales are expected to surpass Model 3 numbers eventually.

Tesla also confirmed that production will begin in a new factory near Shanghai, known as Gigafactory 3, by the end of the year, less than twelve months from the start of construction in an empty green field. The initial target is 250,000 units per year, ramping to 500,000 eventually.

Tesla has a market capitalization of about $41 billion, reflecting a sharp drop on Thursday after results were announced late Wednesday. This valuation seems high, for a car company, when compared to annual revenue of $23 billion. The stock trades near the low end of its recent range, at $227 per share, down from $376 in December 2018.

In summary, it seems likely that Tesla will succeed in the long run. There are too many positive things happening with the company and its products. And it’s not much of a stretch to say that Tesla has already transformed the automotive world, with less than 1 percent of worldwide annual sales.

As an investment the stock will continue to be very volatile, but, if Elon Musk succeeds, owning the stock will be very rewarding for the brave and patient investor.