In deciding what to write about this week there were several topics that came to mind.  Interest rates, valuations, and slowing growth are all important dynamics that are shifting and affecting market.  But I thought it would be fun to cover something lighter.  In part because of the time of year and in part because they seem to garner attention year after year in the media or in minds of investors, this post is about the January effect.

The January effect belongs to a group of stock market concepts called anomalies.  The standard definition of anomaly is a condition that breaks from the norm or expected result.  The stock market definition differs in that anomalies are classified as results that contradict the efficient market hypothesis. In very simple terms, the efficient market hypothesis states that stock prices always reflect all available information.

We know from examining stock market history that markets are not perfectly efficient, and we won’t attempt to address how efficient they are here instead we will look at one anomaly that is timely.

What is the January Effect?

There are two ways to view the January effect.  The first is that it refers to the fact that prices often rise starting in the last few days of December and then on into January.  There are two suspected reasons 1) Prices have been pushed lower by tax loss harvesting tied to the calendar year-end, and 2) Window dressing – the term that refers to mutual fund managers selling underperforming positions at the end of the year or quarter so that they drop off the statement of holdings.

The suspected result is that prices are pushed lower than they otherwise would have been so there may be bargains.  Studies have confirmed that this form of the January effect is valid historically with the most significant boost to returns occurring in the first half of the month.   That said there is more debate about recent years as some claim the effect is diminishing.  Possible explanations are increased use of tax-sheltered accounts that minimize tax loss harvesting effects or the fact that investors have become aware of this and have arbitraged the opportunities away.

This January certainly fits within the profile however one cannot help but wonder if there are other more significant forces that drove the massive rebound in stocks which started in the last trading days of December.  This highlights one of the common critiques of market anomalies.  None of them are reliable 100% of the time and every year is different with different factors driving the markets making it impossible to rule out other explanations.

The second form of the January effect is an outshoot of the first. Essentially, it attempts to say that, “as goes January so goes the year”.  Different investors have suggested that either the performance in the first week or the whole month may have predictive value for the full year.  Despite the fact that it is talked about each year, there is not much debate about the validity of this one as there is very little evidence to support it in recent years, with several notable misses.  In 2018, for example, the month started with great returns in the first half of January but as we know the year finished with dismal performance.  In addition to misses in 2014 and 2016, the long-term track record is also weak. 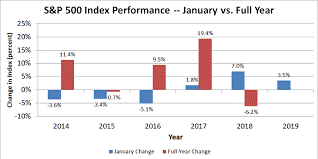 So, while there is some support for the January effect’s role in boosting prices in the early part of the year, there is debate about whether the effects of this anomaly are waning.  And if you hear investors trying to use it as a predictive factor for the full year, you’ll know they are reaching.